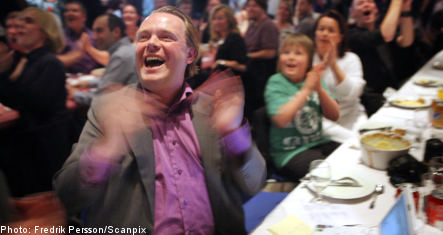 The other main winners in the election were the Greens and the Liberal party.

The Pirate Party won 7.1 percent of votes, taking one of Sweden’s 18 seats in the EU parliament, with ballots in all but one of the country’s 5,664 constituencies counted as the electoral commission halted the tally for the evening.

“Privacy issues and civil liberties are important to people and they demonstrated that clearly when they voted today,” one of the Pirate Party’s candidates, Anna Troberg, told Swedish television on Sunday.

The party was founded in January 2006 and quickly attracted members angered by controversial laws adopted in Sweden that criminalised file sharing and authorised monitoring of emails.

Its membership shot up after a Stockholm court on April 17 sentenced four Swedes to a year in jail for running one of the world’s biggest file sharing sites, The Pirate Bay.

Prime Minister Fredrik Reinfeldt’s conservative Moderates won 18.8 percent of votes and four seats, close to its score in the European election in 2004 but down sharply from the 26.1 percent it won in Sweden’s 2006 general election.

Coming little more than a year ahead of Sweden’s next general election in September 2010, political analyst Mats Knutson called the result a “formidable cold shower” for Reinfeldt, speaking on public television SVT.

The opposition Social Democrats, traditionally Sweden’s biggest party, won 24.6 percent, also close to their result in 2004 and maintaining their five seats in the EU parliament.

The four-party Alliance coalition – made up of the Moderate, Centre, Liberal and Christian Democrat parties – won 42.6 percent of votes and nine seats, compared to 41.1 percent and eight seats for the leftist opposition comprising the Social Democrats, Greens and Left Party.

The Greens scored a strong rise in support, riding a wave of climate concern across the continent, and were credited with 10.9 percent of votes compared to 6.0 percent in 2004 and doubled their seats to two.

Jan Björklund’s Liberal party claimed 13.6 percent of the vote and three seats in the parliament. The party’s success was credited as confirmation of Björklund’s leadership before the general elections next year.

The EU-critical Left party saw its support collapse from 12.8 percent in 2004 to 5.6 percent and one seat, a drop of one.

The far-right Sweden Democrats, who are not represented in Sweden’s parliament, meanwhile tripled their score but not enough to win a seat in parliament.

The Feminist initiative (Feministiskt initiativ) made large gains on their 2006 general election showing of 0.7 percent, claiming 2.1 percent of the vote and attracting 65,000 votes.

The party’s leader Gudrun Schyman put the success down to hard work and gave thanks to former Abba music mogul Benny Andersson for his financial support.

Voter turnout in Sweden was 43.8 percent, higher than the 37.1 percent in