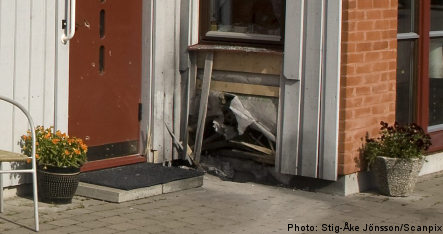 The couple escaped the incident without injury, but a door and wall of their home were destroyed.

Police received a call about the explosion shortly have 1.30am Tuesday morning, and a neighbour told the TT news agency that he was awakened by the blast.

“But we didn’t realized it was an explosion; we thought it was something else,” he said.

Police are remaining tight-lipped about the incident, refusing to comment on whether the investigation is heading in a specific direction.

Carlsson also refused to discuss what type of explosives were placed outside the front door of the couple’s home by one or several people.

“We have a pretty good idea but we aren’t saying anything,” said Carlsson, although he did confirm that the explosives caused the powerful blast.

The area around the house, which is in the Hofterup district near Löddeköpinge, has been blocked off as forensic investigators continue to search for clues.

According to Carlsson, police have interviewed the couple who lives in the house, their neighbours, and others.

“We going through all the information carefully and quietly,” he said, adding that he didn’t want to reveal what had come up during the interviews.

“But we’re casting a pretty wide net in the investigation. We view the incident very seriously and are doing everything we can to get some clarity on what happened.”

Currently, police have labeled the act as a case of suspected devastation endangering the public, a crime which puts someone’s life or health in danger, or causes comprehensive damage to one’s property.

Penalties for the crime range from two to eight years.