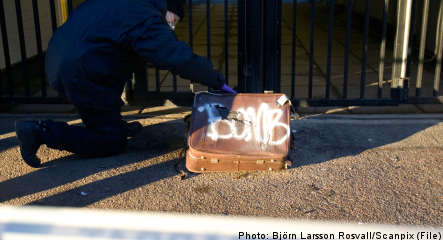 The 33-year-old who led the operation was sentenced to seven years in prison, while 12 other accomplices were given sentences varying in length between three years and five years, four months.

Two other suspects originally included in the 16-person indictment were acquitted, while a third was given a suspended sentence.

According to the indictment, the latter three were suspected of procuring cars in November for use during the January heist.

The gang of heavily armed assailants struck a postal depot near Gothenburg’s central train station in the early hours of January 22nd, 2008, forcing 11 employees to the floor at gunpoint.

Around the same time, fake bombs were placed outside of police headquarters on Skånegatan and another local police office.

The robbers also set several cars on fire in an attempt to create confusion and impede police efforts to come after the perpetrators.

Parts of central Gothenburg were blocked off and hundreds of residents were evacuated because of the threat.

But despite all of the robbers’ preparations, the caper failed to yield the 80 million kronor ($10.3 million) they had expected.

Instead, the thieves ended up with loot worth only about 500,000 kronor, consisting mostly of lunch vouchers (Rikskuponger).

Most of the 16 charged in the case grew up together in the Stockholm area. Eleven of them participated in the actual robbery and related acts of sabotage.