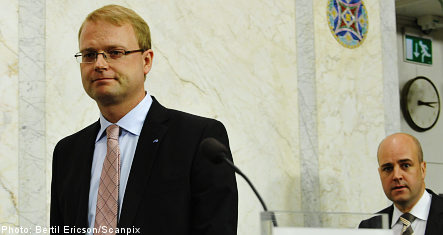 Krantz succeeds outgoing minister Lars Leijonborg, who announced last week he was stepping down from his post.

According to education minister and Liberal Party (Folkpartiet) leader Jan Björklund, Krantz was one of the main authors of the party’s higher education policy.

“He’s a very wise and judicious person. He has the self-effacing sense of humour you need in this job. I’m very happy that Tobias Krantz has said yes,” Björklund said at a Wednesday afternoon press conference.

The 38-year-old Krantz, who since 2002 has represented the town of Jönköping in south-central Sweden in the Riksdag, has served as the Liberal Party spokesperson on social policy and sits in parliament’s Committee on Health and Welfare.

“It’s crucial that Sweden’s universities and colleges can offer a high class education, both when it comes to tuition and academic research,” Krantz said in a statement.

“I want to continue working on the reforms that already have been initiated – independent universities, increased financial support to academic research and a stronger emphasis on quality, are all very important issues.”

Prior to entering politics, Krantz earned a PhD in political science from Uppsala University and worked previously as a journalist and editorial writer.