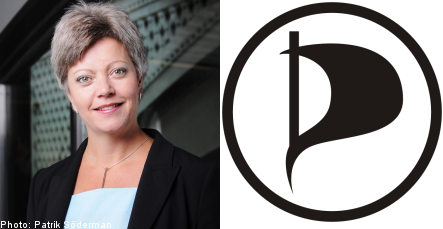 Last Sunday, Annika Qarlsson, who also heads the board of the Centre Party’s women’s organization Centerkvinnorna, reflected on her blog about the success of the Pirate Party in recent European Parliament elections.

“[H]ere’s a thought and a reflection connected to the Pirate Party’s success with many young men, who voted for them in order to protect their personal privacy. [I’m] thinking about the statistics which came out the other day that show there are innumerable young women who are raped by young men who they barely know or don’t know at all,” wrote Qarlsson.

“And I can’t make sense of it – do young men think that privacy is important or don’t they?”

Readers of Qarlsson’s blog responded to the post with a wave of more than 162 comments, the vast majority of which were highly critical of her line of thought.

“To collectively lay blame on a group of people for what a few individuals do is neither fair nor especially intelligent. Moreover it’s far from being liberal,” wrote one commenter.

“Did you know Annika that 80 percent of those who die in car accidents ate tomatoes the day before. Shouldn’t you fight for a ban on tomatoes?” the person wrote.

Qarlsson attempted to backtrack in a later blog post, apologizing to readers for being “vague”.

“I realize that my earlier post can be interpreted to mean that I’m accusing all Pirate Party supporters and all young men of being rapists. That is not the case,” she wrote on Tuesday.

“What I’m looking for is that all men’s engagement reaches the same heights every time a young woman’s privacy is violated, which has consequences for the rest of her life,” Qarlsson wrote.

The challenge, according to Qarlsson is trying to make the connection between the privacy over one’s body and privacy on the internet.

“The respect demanded to have freedom on the internet is exactly the same as demands made by young women when they are out on the streets and in city squares,” Qarlsson told the Realtid.se news website.

“It’s about being respected so that someone doesn’t tread on me or my rights. For me, there are a lot of similarities. That’s why I wish that the issue encompassed that sort of engagement. That was my train of thought.”

In a final blog post on the issue, Qarlsson admitted that the wording of her original post was “misguided” and “totally wrong”.