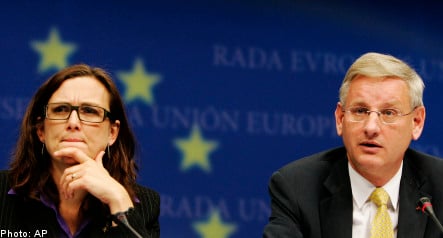 Journalists from countries hoping to join the EU were among the most inquisitive. Many have great expectations for “expansion-friendly” Sweden, but Bildt emphasized they needed to be realistic about what Sweden can achieve during its presidency.

“Miracles are not on our agenda,” Bildt told TT.

At the top of the Sweden’s list are the financial crisis and negotiations for a global treaty on climate change, as well as several institutional issues.

Sweden cannot count on being able to take advantage of momentum gathered within the EU’s institutions as previous presidencies could do. The EU Parliament is newly elected, the Commission is on its way out and its chairman, José Manuel Barroso, does not yet know whether he is staying or going.

In addition, many issues will remain unresolved until Ireland votes on the new EU constitution, the Lisbon treaty, for a second time in October.

Bildt was asked if he would want to become the EU’s “foreign minister” if the constitution enters into force and if such a position were to be created.

“No, I’m not a candidate for anything,” Bildt answered.

Also on Monday, Swedish Prime Minister Fredrik Reinfeldt met with representatives of the Moderate’s Nordic sister parties in Copenhagen. Bjarni Benediktsson, leader of the Icelandic Independence Party, said that he hopes that “Sweden can help get us through” if Iceland applies for EU membership.

Reinfeldt spoke about an “extremely trying” presidency. He also said that Sweden could push for Icelandic membership, but also pointed that there is a major “expansion fatigue” in the EU and that a lot of how long it takes for the country to join the EU is up to Iceland.

“To a great extent, you have a great deal of influence yourself, for instance in how you formulate national exceptions during membership negotiations.”

TRAVEL NEWS
EU extends Covid travel certificates until 2023 but what does this mean for travellers?
Url copied to clipboard!