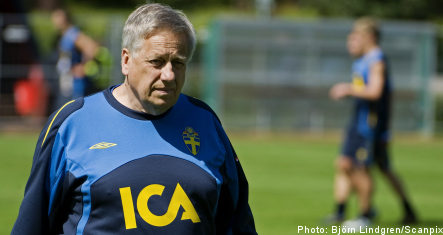 Söderberg faces suspension by UEFA, the governing body of European football and organizers of the tournament, for allegedly shoving a Serbian player during the halftime break of Sweden’s final qualifying match earlier this week, the Aftonbladet newspaper reports.

Sweden defeated Serbia 3-1 with two goals by tournament top scorer Marcus Berg, earning the squad enough points to snag second place in its group and advance to the semi-final against England, the top team in the other qualifying group.

And just as the teams were walking off at the half, Sweden’s Emir Bajrami, a native of Kosovo, was taunted by Serbia’s number seven, Milan Smiljanic.

“I knew that they were going to be on me because Kosovo and Serbia have often been at war with each other. He came up and taunted me, but he did so throughout the match as well,” Bajrami told Aftonbladet.

“I only understood about a quarter of what he said, but it was mostly cursing.”

Smiljanic’s provocation prompted coach Söderberg to come to the defence of his player, at which point he allegedly “pushed Serbia’s number seven”, according to a report filed with UEFA.

“I’m sorry, I was only protecting Emir,” Söderberg told the newspaper.

“I felt bad for him and didn’t push anyone.”

Sweden’s coaching supervisor Börje Sandgren defended the coach’s actions, however, in a separate letter to UEFA describing the incident.

“Their player followed Emir in an objectionable manner and we feel that a coach’s job is to protect his players in that situation,” wrote Sandgren.

Sandgren added that witnesses from the Swedish side claim Söderberg never pushed Smiljanic, and that the player grabbed the coach’s notebook from Söderberg’s hands and threw it to the ground.

According to Sandgren, things calmed down quickly, with both men shaking hands before parting ways.

“It was a UEFA representative who filed the complaint and we don’t share his version of what transpired,” Sandgren told Aftonbladet.

A decision on Söderberg’s possible suspension is expected to come on Thursday.

Meanwhile, Sweden’s players are gearing up for a tough match against England, which is so far undefeated in the tournament, aconceding only two goals in three matches.

But Sweden’s U-21 side, led by Berg and senior national team member Rasmus Elm, have a tournament leading 9 goals – 5 of which have been scored by Berg – and will be playing in front of a hometown crowd at Gothenburg’s Gamla Ullevi stadium.

Nevertheless, with midfielders Bajrami and Pontus Wernbloom on the bench after receiving second warnings in the Serbia match, Sweden will have to make some adjustments.

But co-coach Jörgen Lennartsson wasn’t giving anything away.

“We’re going to play the eleven players we feel have the best chance at winning the match, then you can speculate who it will be,” he told Aftonbladet.