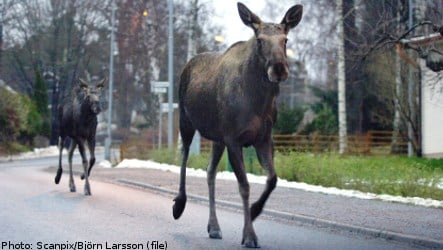 The promenading couple passed by a hamburger restaurant before finding their way to more familiar territory in nearby parkland.

The two elks, thought to be around one-year-old, were spotted around 8am when a Gothenburg resident sounded the alarm and the police were called.

At the time the elks were making their way down a public footpath towards the central station. The visibly stressed and hungry animals passed close to a branch of the Swedish hamburger chain Max near Gamla Ullevi stadium.

Police officers were dispatched to ensure that no members of the public came in harms way and the elks were chaperoned back into a more natural habitat of nearby parkland.

By mid-morning the elks were known to be grazing happily.

“There is nothing to say that they can’t make their way back into town, but they are at least more at home in the parkland area,” explained Frans Dahlén at Västra Götaland police to news agency TT.