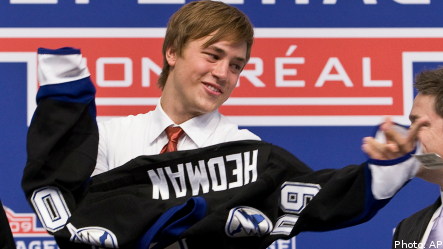 18-year-old Victor Hedman, originating from Örnköldsvik in northern Sweden, was the pick of the Swedish bunch after joining the Tampa Bay Lightning second behind Canadian John Tavares in the draft.

Taveres thereby joins the New York Islanders, while Hedman expressed satisfaction as hit fate became known as news of the first round of draft picks began to emerge at the Bell Centre in Montreal on Friday night.

“Tampa feels better for me. They have good players and should have performed better this year, but I think I have a good chance of getting in the team,” Hedman told a press conference.

Tampa Bay came second to bottom in the NHL last season, and while they can count on offensive stars such as Vincent Lecavalier, Steven Stamkos and Martin St. Louisand they are in need of defensive reinforcements and it is here that Hedman hopes to prove his worth.

Other Swedes that featured in the draft include Oliver Ekman-Larsson, who was selected sixth and therefore joins the Phoenix Coyotes, Magnus Pääjärvi-Svensson who joins the Edmonton Oilers as tenth pick, David Rundblad, 14, now of the St. Louis Blues, and Jacob Josefson, 20, to the New Jersey Devils.

Completing the record Swedish haul of seven first round NHL draft places were Tim Erixon, 23, who goes to the Calgary Flames and Marcus Johansson, 24, who will play the coming season with the Washington Capitals.