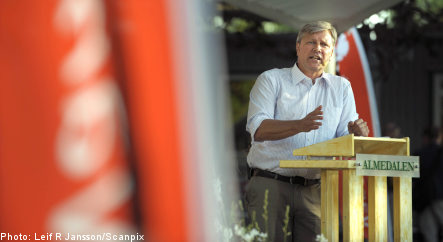 The Left Party kicked off the annual political event in Visby on the island of Gotland by presenting a report on how politicians could prevent economic crises in the future.

“We are now seeing the effects of an unregulated capitalist market and it has proven to be very bad for society. This is a socialist solution even if it doesn’t break with capitalism. We take common ownership as our starting point,” Ohly said.

Among other things, the Left Party wants to increase state ownership in Nordea and said SBAB should devote more of its resources to banking operations. When the government takes control of a bank, that ownership should then be retained. There should also be an upward limit on a bank’s size. Ohly didn’t give specifics.

“Operating a bank must be the best business idea that exists. The bank takes all the profits when things go well, and lets the tax payers foot the bill when things go badly. The Left Party wants to put a stop to that,” Ohly said.

The Lefts want to create an independent finance committee, with representatives from political parties and social partners, as well as economists.

“As opposed to the government, we don’t believe in the self-healing power of the market. The government has its hands out and wants to wait out the economic crisis instead of investing itself out of it.”

Ohly also said that the economic crisis runs the risk of chipping away at labour regulations.

“We are now seeing a return to (the old system of) patronage. The crisis cannot be used as an inroad to worsen labour law,” he said.