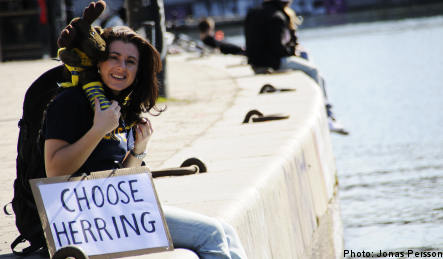 First things first; I am not doing this for a bet. I am voluntarily spending the summer exploring Sweden’s pretty and pretty vast 450,000 square kilometres. Why? Well, I’ll come to that a little later.

Now there’s a recurring phrase, echoed by Swedes in their droves, which has frustrated me since I first set foot here. “We are just a small country,” they say. The grammar I can excuse but I’m less forgiving about the geographical error. Wikipedia tells me Sweden is the 55th biggest country in the world so I think it’s fair to say…quite big. Not massive. But lagom-sized to suit. So my only wager is how much of it I can honestly cover in a matter of eight weeks.

Cultural awareness tells us what they really mean is: “we-pretend-to-be-rather-modest-about-our-fabulous-and-brilliant-country-cos-we’re-not-allowed-to-think-of-it-as-too-important-in-the-whole-scheme-of-like-the-whole-world.” This could explain why no travel writer, to my knowledge, has really bothered to grab Sweden by its Viking horns, explore the places and people and then put pen to paper.

Probably the most classic travel tale of our time would have us believe it took a certain Mr Fogg only a few weeks more than my two-month voyage to circumnavigate the globe. And, unlike me, he wasn’t able to rely on the second class comfort of SJ to get him to places on time – I wait to see whether the punctuality statistics of the state-run railway are also pure fiction.

Indeed, shorter train rides of late have seen me commuting on the capital’s blue line armed with travel literature in search of inspiration. To stand out from the bookshelves of journeyed memoirs, it seems, you really need some kind of eccentric trait, characteristic or ‘thing’. Take author Alan Booth who sadistically blistered his way through Japan, trekking 2000 miles on foot in The Roads to Sata. Or comedian Tony Hawks who took a novel companion along in his debut manuscript Round Ireland with a Fridge.

Aside from some tacky tourist regalia in the form of a plastic Viking hat which I have become rather partial to (see photos) I am not resorting to a gimmick in the form of a silly mode of strenuous transport nor a random kitchen appliance.

Maybe in Sweden alone I already have my gimmick. Bill Bryson would probably agree, having not been overly enthused with the place whilst on a European tour for his book Neither Here Nor There.

”I don’t begin to understand a lot of things about Sweden,” he says “…The highest income-tax rates…the harshest drinking laws, the dreariest bars, the dullest restaurants…the most fun thing to do is walk around semi-darkened shopping centres after they have closed…”

But when I leave the capital for Kiruna on July 1st, I hope to scratch more than the surface of the stereotypes. It will be one day short of my seventh anniversary of moving to Stockholm and it’s some sort of itch to venture further than a ten-mile radius to the city suburbs or IKEA. It’s something I’ve unfortunately failed to do much of in my time here so far, apart from a few weekend benders to Gothenburg and ski expeditions which only serve to exacerbate my outdoors sports inability even further.

Hailing from Britain, I sometimes mourn the fact I haven’t seen the best of my own backyard. The port of Dover is the closest I’ve come to the English Riviera. And I’ve never been to Wales either. Suddenly Borlänge seems more appealing.

Starting in the north, I’ll be kept awake by the glorious midnight sun before descending in a downward spiral to meet and greet the people and places that make Sweden what it is today.

In moments of weakness, I may revert to becoming a typical ex-pat observer. But I remain determined to learn and share some deeper insights into the history and culture of this varied terrain and pose some hard-hitting questions such as: “what do people in Jokkmokk really do on a Friday night?”

I do hope you will follow the blog and I encourage you all to be my virtual Passepartout en route – I’ll be more than happy to hear your top ten tips of things to do in Linköping and beyond. A list of five would probably do nicely. Three, even? Or if I’m nearby your local you could equally just offer to buy me a pint. Cheers to that and a very glad sommar to you all.