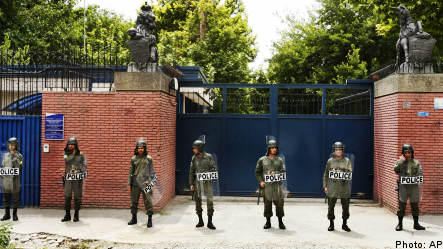 European nations have been considering a proposal from Britain to recall their ambassadors from Iran in protest at the detention of the British embassy employees.

“We are ready to take action if we don’t get a reaction” from the Iranian regime, a spokeswoman for Swedish Foreign Minister Carl Bildt told AFP on Thursday.

According to the British government, seven of the nine local staff originally detained have now been released. They were also investigating reports that one of the two remaining detainees had also been freed.

The nine local employees from the British embassy were arrested by Iranian authorities on June 28th.

Iran accuses Britain of having orchestrated the protests against the result of the country’s recent presidential vote, which sparked the most violent protests in the history of the Islamic Republic.

According to Iran’s chief of police, at least 20 people have lost their lives in the unrest.

The Iranian authorities allege the British embassy sent its staff into the midst of the opposition demonstrations to stir up trouble after Iran’s President Mahmoud Ahmadinejad was re-elected.

Britain has vehemently denied the charge.

Bildt’s spokeswoman Irena Busic voiced hope that it would not be necessary to freeze diplomatic ties with Tehran.

“We are interested in maintaining relations with Iran. We are expecting further contacts with them regarding the British personnel,” she said.

“We take things step-by-step and wait for the Iranian reaction,” Busic added.

While many EU nations are reluctant to pull their ambassadors out of Tehran, they hope diplomatic pressure will secure the release of all British embassy employees.

One idea being circulated is to recall ambassadors for a few days as a sign of protest, according to one European source.

A two-day meeting of senior European foreign affairs officials opened in Stockholm Thursday focused on the EU response to the events in Iran.

Despite vocal condemnation of the crackdown on peaceful protests, the Europeans like the US have adopted a measured approach towards Tehran, keen not to compromise talks on its controversial nuclear programme.

Iran has already accused the US and Europe of interfering in its internal affairs.

On Wednesday an Iranian military official, cited by a local news agency, said Europe had “disqualified” itself from taking part in the nuclear talks.

Europe should avoid polarising Iran from the rest of the world and giving the regime an excuse to use force and repression against opposition supporters, he warned.

The question of how to handle Iran is set to dominate the summit of the Group of Eight leading industrialised nations in Italy next week.