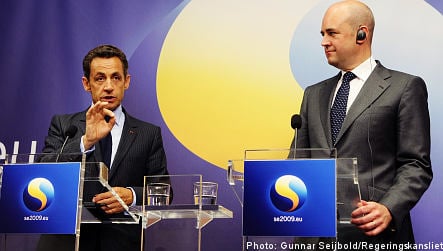 Reinfeldt, speaking during a joint press conference with French President Nicolas Sarkozy in Stockholm, said there would be “no decision” taken “during the month of July.”

The European Council, consisting of the heads of state or government from EU member states, in mid-June expressed support for Barroso’s re-election, but the European parliament, which must also vote on the matter, has indicated it could put off its decision until the autumn.

“The independence of the European parliament must be respected,” Reinfeldt

Sarkozy said he hoped the vote could take place “in September.”

Reinfeldt, whose country took over the rotating six-month presidency of the EU on Wednesday, said he had consulted with the leaders of the European parliamentary groups and some of them were opposed to a vote in July.

Sweden had been hoping to see a swift re-election in order to have a new Commission in place as quickly as possible for its presidency.

Sarkozy said however that the date was not that important.

“July 15th or September 15th, it’s not that important. What is important is that there be no opposition between the (European) council and the parliament,” he said.