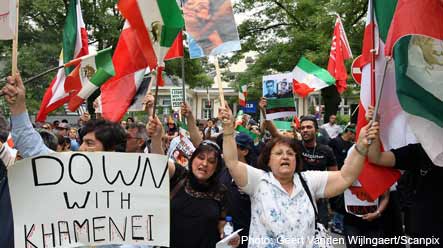 Demonstrators wave Iranian flags outside the Iranian Embassy in Brussels

Swedish state secretary for foreign affairs Frank Belfrage told Iranian Ambassador Rasoul Eslami that Britain had the “full support” of the European Union’s 27 member states. “We demand that Iran immediately release the locally engaged staff who are being detained. If this does not occur, the EU will take further action,” Belfrage said following the meeting.

The British government said on Friday it was “deeply concerned” by an Iranian announcement that some embassy employees will face trial for their role in allegedly stoking post-election violence.

Nine local staff at the British embassy in Tehran were initially arrested late last month but the British government said seven have been released, while Iranian state television has said only one remains in custody.