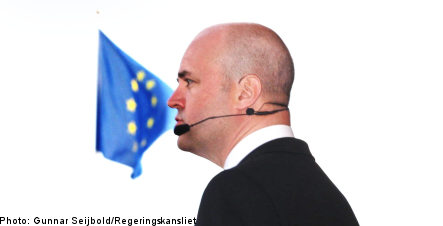 “I will begin the formal procedures in the (European) Council so that Mr. Barroso can be nominated so that we can have a European Commission president in place as soon as the European Parliament has taken its decision,” the Swedish premier said on Monday during a joint press conference with European Parliament president Hans-Gert Pöttering

The move could be seen as a means for the European Council, the EU institution representing heads of state and government, to put pressure on lawmakers to back his re-election.

Pöttering said that the European Parliament should vote on the fate Barroso by the end of September.

The German lawmaker said the results in the recent European elections mean there will be no chance of the former Portuguese prime minister being re-appointed before the end of July.

“Since the elections the position of some groups in the European Parliament has changed and so we don’t see a majority now for the election of the presidency in July, but hopefully it will be possible to elect the president of the Commission in September,” Pöttering told reporters in Stockholm during a joint press conference with Swedish Prime Minister Fredrik Reinfeldt.

“I think we should do everything possible to bring the procedure forward to make this possible,” he added.

EU leaders agreed informally in June to back Barroso’s bid for a new five-year term as no rival had emerged and expressed an interest in the job, leaving the former Portuguese prime minister as the sole candidate.

The centre-right members of the parliament want to vote now on his candidacy but lack a sufficient majority to force one to be called immediately.

They will need allies from across the political spectrum if they are to give Barroso the green light.

But those on the left of European politics question whether Barroso has a clear and credible agenda for the next five years and accuse him of reacting too slowly to the global financial crisis.

Many left-wing lawmakers also regard the Portuguese as too liberal and too Atlanticist.

Sweden had been hoping to see a swift re-election in order to have a new Commission in place as quickly as possible for its presidency and avoid creating a political vacuum.