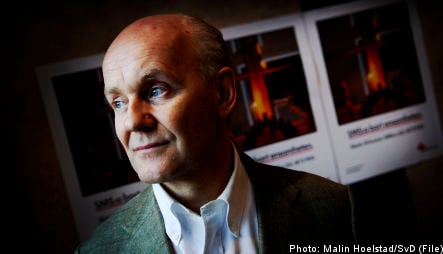 On Monday, the Swedish Cancer Society (Cancerfonden) claimed that af Donner had swindled the organization out of 1.6 million kronor ($204,000).

At the same time, the Swedish Red Cross (Röda Korset) added an additional 2.3 million to the previous sum of 2.7 million kronor it believes its former head of communications took from the organization.

“I’ve made an asset seizure request with the Stockholm District Court with reference to the Red Cross for a further 2.3 million kronor,” said chief public prosecutor Alf Johansson to the TT news agency.

Af Donner worked for the Swedish Cancer Society between 1997 and 2004.

“Today we’ve filed a damages claim against the suspect and the prosecutor has also filed an asset seizure request for the amount” said Cancer Society spokesperson Rebecka Blomberg to TT.

According to Blomberg, the organization plans to take a break from its internal investigation in conjunction with filing the case with prosecutors.

“The police have the ability to look into more information than our hired accountants can. Therefore we’re choosing to devote our resources to the police investigation,” she said.

Af Donner is already suspected of breach of faith committed by an agent on his principal and aggravated fraud in connection with a billing scandal which took place at the Red Cross between 2004 and 2009.

“This is the damages claim which currently exists and which I’ve filed an asset seizure motion for, and the amount will become clear from our police investigation,” he said.

The filing made at the district court allows for the entire amount, 6.6 million kronor, to be secured by the Swedish Enforcement Agency (Kronofogden) to settle the amounts owed to the plaintiffs.

Leif Silbersky, who is representing af Donner in the case, refused to comment on the new damage claims because of the complexity and wide-ranging nature of the investigation.

“We’ll see what comes out of the interviews to be held with my client,” Silbersky said.

Two additional people are suspected of participating in the scam. They’ve been interviewed in the investigation but prosecutors haven’t found sufficient reasons to keep them detained.

It remains unclear when formal charges may be filed. Af Donner remains remanded in custody through July 10th, at which point prosecutors are required to file a new motion to extend his detention.

“My understanding is that he will be released on Friday because the investigation has come so far, but that’s up to the prosecutor to decide,” said Silbersky.