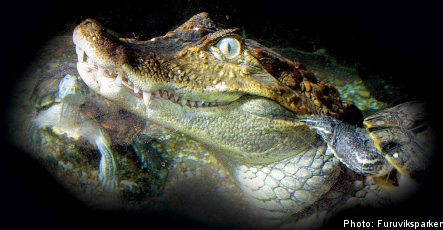 The girl, Elisa, was left needing stitches when the reptile lurched forward and snapped at her outstretched hand, Aftonbladet reports.

The girl was pointing something out to her older brother in Furuviken park’s new South America house when the crocodilian reptile attacked.

“I hardly remember anything, I was terrified,” Elisa told Aftonbladet.

Elisa’s brother told the newspaper that the family was shocked by the sight of the girl’s finger “covered in blood and in tatters”.

The girl was taken by ambulance to Gävle County Hospital. She was discharged on Monday evening with a heavily bandaged finger.

But head zookeeper Johnny Persson refused to blame Gorm, the 20-year-old spectacled caiman, for feasting on the visitor’s fingertip.

“The enclosure is surrounded by a fence that is 1.30 metres high. The girl bent down right over the fence and animals like that don’t like it when you point at them,” he told The Local.

Persson added that the park had plenty of staff in attendance but with a big holiday crowd in for the day, nobody spotted Elisa until it was too late.

“Obviously you shouldn’t lean over a fence near dangerous animals but we are now going to raise the height of the barrier and put up new signs,” he said.