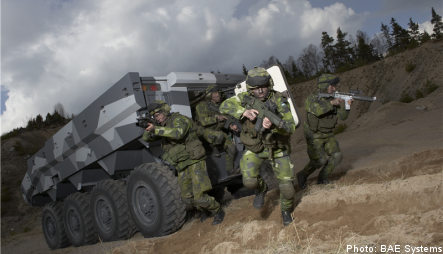 In late June, the Swedish Defence Materiel Administration (FMV) announced that Finland-based Patria had been awarded the estimated €240 million ($333 million) contract to supply the Swedish Armed Forces with 113 vehicles starting in 2011.

The decision took Swedish military vehicle manufacturer Hägglunds, a subsidiary of UK-based BAE Systems, by surprise, forcing the company to cut more than 300 jobs at its plant in Örnsköldsvik in northern Sweden.

“The notice of impending layoffs is distressing for all involved and we have to adjust. However, we continue to hope that the government’s decision will go in a different direction than FMV’s, which would obviate the need to carry out the redundancies,” said Hägglunds CEO Jan Söderström in a statement.

Last week, the company appealed the FMV decision in the Stockholm County Administrative Court (Länsrätten), claiming that FMV violated public procurement laws in awarding the order to Patria, according to Sveriges Radio (DI).

On Friday, the court granted an injunction preventing the deal from moving forward until the court has had a chance to review all the related documentation and render a final decision.

The controversial tender even prompted the head of Global Combat Systems at BAE, David Allott, to fire off a sharply worded letter to Swedish Prime Minister Fredrik Reinfeldt.

In the letter, which was to be forwarded to defence minister Sten Tolgförs and industry minister Maud Olofsson, Allott said he was “surprised” and “disappointed” that Hägglunds didn’t win the contract, the Dagens Industri (DI) newspaper reports.

He went on to question whether or not BAE would continue to invest in or have a presence in Sweden in the wake of the lost order.

The controversy deepened further on Wednesday when documents emerged showing that in an evaluation carried out two years ago, FMV had actually found the Hägglunds vehicle to be the only armoured vehicle wwhich fulfilled the requirements set out by the Swedish military, according to SR.

Those responsible for the 2007 FMV study explained, however, that the vehicles compared in the assessment are not fully comparable to the Finnish vehicles now chosen by FMV.

Regardless of the outcome of Hägglunds’ legal challenge, the deal is far from being completed.

The final decision to go ahead with the purchase of vehicles from Patria is made by the government, which can only act after approval of the deal by the Riksdag.