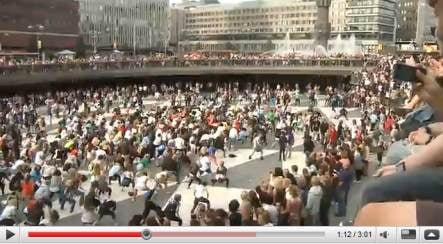 A “flash mob” of fans joined with the professional dancers at Sergels Torg square and Central Station for a choreographed performance of Jackson’s Beat It.

The performance came the day after much of the country was glued to television and computer screens to watch the live broadcast of a memorial service held for Jackson in Los Angeles.

The Bounce Streetdance Company was formed in 1997 “by some of the best streetdancers in Sweden to explore the different dance styles of popping, locking, boogaloo and new school,” according to the group’s website.

Bounce published details of its plans on its MySpace page two days before the scheduled public dance performances. The group invited members of the public to brush up on their Michael Jackson moves before assembling in the city centre.

Would-be dancers were advised to wear their regular clothes in order to melt into the crowd and catch passers-by unawares.

Bounce said its dancers had agreed to perform for free but the group had arranged a sponsor to cover the costs of a professional video recording of the event.