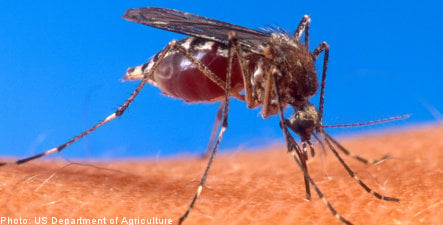 Due to rules restricting the use of pesticides designed to protect nearby nature reserves, mosquitoes have been breeding unhindered, leaving residents almost completely housebound, the Dagens Nyheter newspaper reports.

“We just sit inside and look at each other.”

Brooks’s family has owned a farm in the area since 1540, complete with horses, cows, goats and hens.

But an ageing fence remains unmended and other chores are piling up as the mosquitoes have put a stop to all outdoor work.

“You become really stressed, that you can’t go out and do the things that need to be done,” said Brooks.

Ingrid Bergman lives in the nearby village of Ista, which may be teeming with even more mosquitoes than Österfärnebo.

Earlier authorities allowed the use of the pesticide ‘BTI Bioinsecticide’ to control the insects. Spraying was carried out over the last three weeks, and seemed to cure the problem.

But when the Swedish Chemicals Agency (Kemikalieinspektionen) stopped the spraying of 600 hectares in nearby Färnebofjärden national park, the mosquitoes returned with a vengeance.

“The mosquitoes were as thick as before. After one week they were back and they hatched new eggs all the time,” Bergman told DN.

Residents are very frustrated that local authorities haven’t taken care of the problem, instead leaving residents to fight the bureaucracy with letters, telephone calls and meetings.

They feel that the problem lies in a lack of coordination between the county authorities and the Swedish Chemicals Agency, responsible for authorizing the use of chemicals.

“This is bureaucracy. If public servants just came here to see the problem first hand, they would understand us,” said Bergman.

Finally however, the Swedish Chemicals Agency has recently sent an application to the central government seeking a resolution authorizing them to control the mosquito problem with BTI.

“We couldn’t anticipate that the problem would be so extreme,” Siv Ljungquist, head of department at the Swedish Chemicals Agency, told DN.