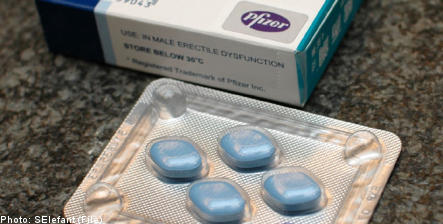 The case involves a man from Gothenburg in western Sweden who recently emerged from a 15-year addiction during which he was treated with a medicine that left him impotent, the Göteborgs-Posten (GP) newspaper reports.

The issue of whether or not he was entitled to assistance originally came about because he did not have specific medical advice recommending that he needed to take the potency medication.

The local support unit in the city’s Majorna district originally denied man’s request for assistance to pay for the Viagra, as it is not included on the list of subsidized high-cost medicines.

But following the ruling by the County Administrative Court (Länsrätten), the list will likely be changed.

The court referred a 2005 judgment from the Administrative Court of Appeal (Kammarrätten) in which a sick man was found to be unduly suffering from a lack of sex.

In arguing in favour of the 30-year-old’s request, the court ruled that having sex is considered an essential part of a attaining a reasonable quality of life and that, as a result, people have the right to assistance in paying for potency drugs such as Viagra.

However, the court left unresolved the question of how often a person is entitled to receive the sex pills.

“This is clearly difficult to assess. How often should someone have Viagra? Is it once a week? Does that amount to a reasonable quality of life?” Henrietta Nyberg from the Majorna support unit told GP.

Since there is no standard stating how often a person needs to have sex to achieve a reasonable quality of life, the municipality’s local support unit has been left to make its own assessment regarding how much of the 30-year-old Viagra should be subsidized.