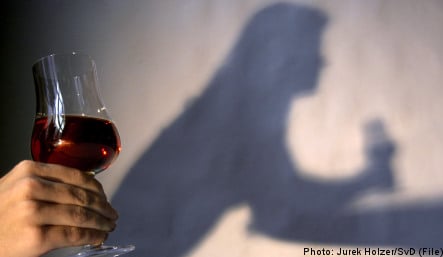 The number of women over 65 who have been treated for alcohol-related illnesses has doubled over the last ten years – from around 200 ten years ago to 400 today, reported Sveriges Radio, which presented figures from the National Board of Health and Welfare (Socialstryrelsen).

One reason behind this might be that women currently approaching pension age have different drinking habits than previous generations, according to doctor Sven Andréasson, an alcohol specialist at the Swedish National Institute of Public Health (Folkhälsoinstitutet).

But it’s not just female pensioners who are drinking more. Alcohol-related deaths among Swedish women increased by 16 percent between 1979 and 2006, according to statistics from the National Council for Alcohol and Drug Information (Centralförbundet för alkohol- och narkotikaupplysning – CAN).

And an increasing number of those arrested for drunkenness and drunk driving are women. The number of women who received institutional care for alcohol abuse also doubled between 1984 and 2007, while around a quarter of the patients receiving alcohol-related in-patient care during the 2000s have been women, according to CAN.

Alcohol-related deaths among men, however, were still four times higher than among women during the 2000s.