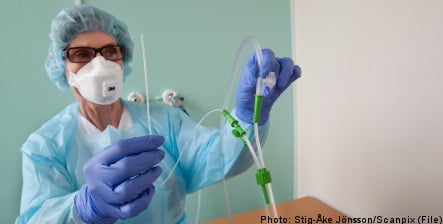 In the worst case scenario, more than 5 million Swedes – more than 50 percent of the country’s population – could be infected.

The figures come from a joint effort by the National Board of Health and Welfare (Socialstyrelsen) and the Institute for Infectious Disease Control (Smittskyddsinstitutet), which together carried out a simulation using data from Statistics Sweden in which Sweden’s population is connected into one, large social network, the Dagens Nyheter newspaper (DN) reports.

The infectious diseases agency drew up four different scenarios by adjusting two main variables: the speed with which vaccination programmes are set in motion and how aggressively the disease spreads.

If vaccination starts quickly and the disease spreads slowly, more than 436,000 Swedes will be infected by the swine flu, according to the simulation.

If the disease spreads quickly, however, and the start of vaccinations are delayed, around 5 million Swedes will become infected.

Because the swine flu is completely new, 20 to 40 percent of the country can be infected if Swedes aren’t vaccinated.