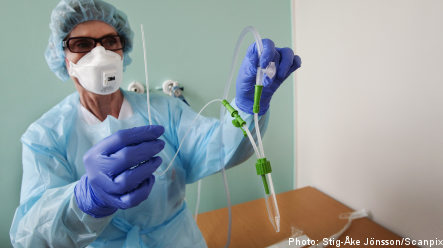 Instead, the National Board of Health and Welfare (Socialstyrelsen) has joined with the Institute for Infectious Disease Control (Smittskyddsinstitutet) in channeling its energies into minimizing the effects of the pandemic.

Under the health board’s new guidelines it will only be compulsory to report flu cases when infection results in hospital treatment. All cases diagnosed at laboratories will also be reported to health authorities.

“The changes mean that the healthcare system is directing its testing, treatment and preventive measures at people in the risk groups, meaning people who risk becoming most seriously ill or dying, as well as the people who are caring for, or are in closest contact with, these people,” said Anders Tegnell, head of the health board’s infectious disease unit to the TT news agency.

Those in the risk zone include diabetics, people with chronic lung or cardiovascular diseases, immune system deficiencies, pregnant women and children under the age of two.

The healthcare agencies have also recommended being more restrictive in prescribing the anti-flu drugs Tamiflu and Relenza in order to avoid the development of drug resistant strains of the flu.

Only people in the aforementioned risk groups are to receive vaccinations, according to Sweden’s health authorities, although they added there is no risk of the country’s vaccination stockpile becoming depleted.

According to figures from the World Health Organization (WHO), there have been 95,000 cases of the swine flu around the world, including 429 fatalities.

So far Sweden has had 187 confirmed cases of the disease, with 28 of the people having been infected within the country.

The costs associated with the autumn vaccination programme will be borne by Sweden’s county councils, and are estimated to total 2-3 billion kronor ($256-384 million).

If the councils, which manage the purveyance of healthcare in Sweden, don’t receive economic support to carry out the vaccinations, it’s possible they may be forced to cut back in other areas, according to Göran Stiernstedt, an expert on health matters at the Swedish Association of Local Authorities and Regions (SALAR).

But as of now, there are no plans for the government to authorize additional funds to the councils.

“The state has already paid for the so-called pandemic guarantee agreement with the vaccination manufacturers – and the county council now has total responsibility for carrying out the vaccinations,” said Niclas Thorselius press secretary for health minister Maria Larsson, to TT.