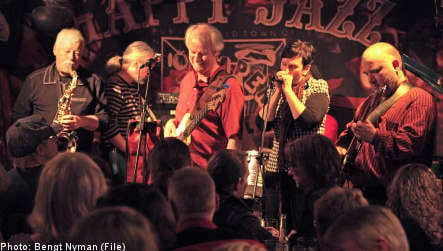 A blues jam at Stampen from January 2009

It’s a Tuesday evening and the backstreets of Stockholm’s Old Town are quiet except for a building on a corner where a sign hangs depicting a beaked crow in a top hat and brandishing a saxophone. The notes of a searing guitar solo waft out into the street, luring in passers-by like moths to a lamp to enjoy a good time. For this is Stampen – the self-styled “world famous” jazz and blues club in the cobbled heart of Gamla Stan.

The first thing you notice upon entering Stampen is the low ceiling adorned with all manner of objects. Each visit reveals something new that had gone unnoticed in the valuable mélange of museum-piece objects – salvaged from the premises’ previous entity as a pawnshop – which include a life-size female mannequin, a gramophone, pram, sleigh and even a stuffed dog in a glass cabinet case tucked away in a corner. In fact, the name Stampen derives from the stamps clients would receive in return for their deposited items.

Just as interesting as the ceiling is the diverse crowd of people on the ground, ranging from ageing 60s’ rockers, blues aficionados, genuine oddballs, bikers, transvestites, and young hipsters even down to toddlers – not to mention the occasional tourist who wanders in thinking that they were rambling through the medieval charms of Stockholm’s Gamla Stan only to be transported to a joint somewhere along the American blues belt.

The people are also easy to mingle with, defying the stereotype of Swedes as cold and reserved. And the remarkable thing is that everyone seems genuinely happy like nowhere else I’ve seen in Stockholm – and that’s saying a lot, especially for a weekday evening in mid-winter.

“Before it was mainly traditional jazz and older people who came here, but I wanted to attract younger people as well and to have different kinds of music,” says Josef Haddad who took over as manager of Stampen some eleven years ago.

And although more traditional jazz is still on the menu mid-week, the music on offer is eclectic and encompasses R&B, soul, country, swing, as well as rock and roll, among other genres.

Nowadays Stampen is more popular than it has ever been and builds upon a reputation that over the years has seen the likes of Woody Allen, Eartha Kitt, and Dizzie Gillespie all grace the club with their presence. While perhaps not of the same stature (but nonetheless one of the most popular groups), the house band, Jump4Joy, has been playing in Stampen for some twenty-odd years.

They combine New Orleans, swing, boogie woogie and even rap, which sometimes ends with singer and pianist Ulf Sandström parading up and down the bar while belting out a number.

“You are listening to some of the best Blues in Scandinavia – and all for free”, exclaims frontman Brian Kramer to an enthusiastic audience.

“We are transcending generations today – where else in Stockholm can you get this?” he continues as a steady stream of old pros and young wannabes with unwieldy guitar cases head for the stage waiting for the chance to strut their stuff.

Started in 1998, the Saturday sessions have since become a showcase for Sweden’s emerging blues and jazz talent. Long a male domain, a number of women have also plucked up the courage to whip out a harmonica and wail the Blues. The atmosphere can get a bit raucous when the beer flows, or following a particularly nirvana-inducing guitar performance on a cover of Hendrix’s Voodoo Child.

God knows what the congregation of the French Reform Church, which occupied the same premises until 1880, would have thought of it all.

After that, the space was converted to a pawnbroker’s shop, before finally, in 1968, evolving into its present reincarnation as a jazz club – the brain-child of jazz enthusiasts Sten and Gun Holmquist.

These days, it can get a little cramped at the weekends, so some may prefer the more chilled out – but still swinging – atmosphere of a weekday night. However, weekend nights do feature two bands playing, with the downstairs floor, which boasts a dancing floor in the evocative 17th century cellar, also open for those wishing to move their feet.

Behind the stage upstairs hangs a large banner saying “Happy Jazz Please”. And indeed forty years on, Stampen finds itself far from a mid-life crisis. Instead, this is a happy place where the music is uncomplicated and promises a pure, foot-stomping time, and where the atmosphere is without the pretensions afflicting some of the more fashionable establishments in Östermalm.

“What are your plans for the future of the club?” I ask Josef: “To keep it just as it is”, he responds.

Stampen (Stora Nygatan 5, Gamla Stan) is open six nights a week from 8pm until 1am during the week and closes an hour later at weekends. There is free entrance Mondays to Thursdays while there is an admittance fee on Friday and Saturday nights of around 100 kronor. The free Saturday afternoon blues jam takes place between 2pm and 6pm. For more information, call +46-8-205793 or click on the link below.