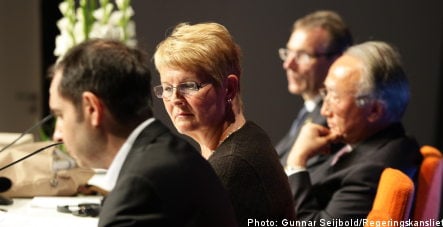 With the EU striving to meet its ambitious climate goals, the European Commission quizzed member nations Thursday on whether to make targets for cutting energy use legally binding.

EU Energy Commissioner Andris Piebalgs opened a debate with ministers at a meeting in Åre in northern Sweden on the bloc’s goal to cut consumption by 20 percent by 2020 becoming a mandatory target.

But many of the 27 countries are wary of imposing a new limit, conscious of the fact they already have a number of environmental commitments to honour.

The EU decided last December to cut its greenhouse gas emissions by 20 percent compared to 1990 levels by 2020 — the most ambitious target set thus far on the international stage.

To achieve that overarching goal, energy use would have to come down by 20 percent while 20 percent of all energy consumed by Europeans would come from renewable sources.

Only this last target is voluntary, meaning member states cannot be fined if they fail to reach it.

“From a Swedish point of view I think it’s good if we can have a mandatory target for energy savings,” Olofsson told AFP.

Yet she admitted: “It’s very difficult to find a way of measuring energy efficiency.”

The European parliament also backs making this goal obligatory in the EU.

“When there is a legally binding target, we succeed,” one European Commission official said.

If there is no extra pressure put on the member states, the EU could fail in meeting its greenhouse gas targets, the official said.

However, a senior diplomatic source told AFP that forcing countries to meet this target could backfire.

“It would be inefficient and it would destroy Europe’s climate objectives,” the source said.

Italy’s Economic Development Minister Claudio Scajola said he did not oppose the 20 percent target but called for some flexibility.

“It is important that the framework is flexible because there are different situations in each country,” he said, pointing to the differing levels of economic growth between all EU member states.

To make those crucial energy savings, buildings, transport and household appliances will need to be adapted to be “more efficient”.

Consumer behaviour will also need to change if that target is to be reached.

Since 2006, EU members have been preparing their own strategies to tackle the problem of energy efficiency.

But officials in Brussels believe they lack bite and they say further legislation to bring about the necessary change is needed.

One measure intended to do so was at the centre of discussions here on Thursday — a plan to introduce an EU-wide energy efficiency label for all buildings.

The aim is to encourage landlords to spend money on making their property more eco-friendly, something which is difficult to do when their tenants are the ones paying the electricity bills.

According to the European Commission, homes and offices are responsible for 40 percent of emissions of carbon dioxide, the main gas responsible for global warming, across the EU.

Under the commission’s proposals, all buildings put up for sale or on the rental market would have to supply information on the levels of insulation, CO2 emissions and advice on how to make further energy savings.

The EU has already introduced one such measure to encourage homeowners to cut back on energy bills: the sale of traditional light bulbs will be banned from September 1, 2012, steering consumers towards their energy-saving equivalents, which use five times less electricity.

How many wolves are there in Sweden?

Wolves were extinct in Sweden by the mid-1880s, but a few wolves came over the Finnish border in the 1980s, reestablishing a population.

There are currently 480 wolves living in an estimated 40 packs between Sweden and Norway, with the vast majority — about 400 — in central Sweden.

How many wolves should there be?

In 2015, the Environmental Protection Agency was commissioned by the government to update the analysis,  and make a new assessment of the reference value for the wolf’s population size. It then ruled in a report the population should be maintained at about 300 individuals in order to ensure a “favourable conservation status and to be viable in the long term”.

Sweden’s right-wing opposition last week voted that the target number should be reduced to 170 individuals, right at the bottom of the range agreed under EU laws. With the Moderate, Christian Democrat, Centre, and Sweden Democrats all voting in favour, the statement won a majority of MPs.

“Based on the premise that the Scandinavian wolf population should not consist of more than 230 individuals, Sweden should take responsibility for its part and thus be in the lower range of the reference value,” the Environment and Agriculture Committee wrote in a statement.

Why is it a political issue?

Wolf culling is an almost totemic issue for many people who live in the Swedish countryside, with farmers often complaining about wolves killing livestock, and hunters wanting higher numbers of licenses to be issued to kill wolves.

Opponents of high wolf culls complain of an irrational varghat, or “wolf hate” among country people, and point to the fact that farmers in countries such as Spain manage to coexist with a much higher wolf population.

So what has the government done?

Even though the ruling Social Democrats voted against the opposition’s proposal, Rural Affairs Minister Anna-Caren Sätherberg agreed that the wolf population needed to be culled more heavily than in recent years. As a result, the government has asked the Environmental Protection Agency to once again reassess how many wolves there should be in the country.

“We see that the wolf population is growing every year and with this cull, we want to ensure that we can get down to the goal set by parliament,” Sätherberg told the public broadcaster SVT.

Sweden would still meet its EU obligations on protecting endangered species, she added, although she said she understood country people “who live where wolves are, who feel social anxiety, and those who have livestock and have been affected”.