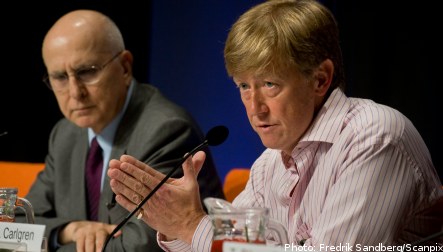 Swedish Environment Minister Andreas Carlgren told journalists that the EU would be prepared to provide financial assistance but should not commit to any figures ahead of the talks aimed at forging a deal to tackle climate change after the existing Kyoto Protocol expires in 2012.

“There can be, with regard to the negotiations (in Denmark), a reason to wait for

His comments came during an informal meeting of EU environment ministers in Åre in northern Sweden.

German State Secretary for the Environment Matthias Machnig echoed Carlgren’s views, saying that it would be better for the EU “to wait a bit”.

“It is not very clever to put all aces on the table when you are playing poker,” he said.

His Austrian counterpart Nikolaus Berlakovich told AFP that he believed Europe was more likely to reveal its hand on the eve of the summit, which runs from December 7th-18th.

“I don’t believe any figures will be announced in October,” he said, referring to a meeting between European heads of state and government that could give the Swedish presidency a full mandate to negotiate at the talks.

Britain’s State Secretary for Energy and Climate Change Ed Miliband, however, said that he hoped a package for emerging economies could be put together at that time.

“We can’t leave it to the last night in Copenhagen before reaching an agreement,” he told AFP.

British Prime Minister Gordon Brown suggested last month that poorer nations would need as much as 100 billion euros ($142 billion) a year to help them adjust to climate change, while the European Commission has suggested a figure of 30 billion euros.

The 27-member bloc is now driving a hard bargain with these countries, saying money will only be released if they put forward clear strategies for the green development of their economies.

“We are paying for something. We need to see we have the right contributions put on the table (from developing countries),” said Sweden’s Carlgren said.

If an agreement is reached in December, the EU has promised to cut its greenhouse gas emissions by 30 percent between now and 2020.

If talks break down, Europe says it will stay on its current track of cutting emissions by 20 percent by that date.

Aside from the finance issue for poorer nations, there is also the internal question of how to share the burden of carbon emissions fairly across the 27 EU member states.

EU environment commissioner Stavros Dimas told journalists that he was confident the issue would be resolved within the next months.

“That will be decided before Copenhagen,” he said.

But some officials fear the process will involve intense bartering that overshadow the run-up to the talks and even undermine the EU’s claim to be united as a world leader on climate change.

“(This) has to be delayed until after Copenhagen to avoid countries like Poland paralysing our ability to negotiate on the international stage,” said one European delegation.

Poland is heavily reliant on coal power and fears that over-ambitious targets will lead to soaring energy prices and slower economic growth.

“If now we go from 20 to 30 percent (in a reduction of EU carbon emissions), the costs for Poland will become prohibitive without a mechanism for solidarity,” he told AFP.

EU environment ministers will meet again October 21 in Luxembourg – the day after their finance counterparts hold talks there – with these key issues high on their agenda.

Heads of state and government could then agree on the EU’s joint position during a two-day summit in Brussels on October 29 and October 30.