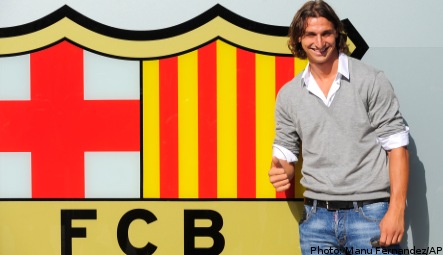 Ibrahimovic stated his eagerness to learn Barcelona’s winning methods as he arrived at the Nou Camp ahead of his medical scheduled for Monday.

“I want to learn how Barca play. There are champions in every position and I want to learn what I can from all of them,” the Inter Milan player said in an interview published on the Spanish club’s website.

“When I saw Barca were interested in me I told my manager to sort it out and he’s done a great job. Who wouldn’t want to come to Barca? I think any player would want to represent what is the best club in Europe and maybe the world.”

“The best players have to be at Barca and I hope to be one of them. I’m coming here with the qualities everyone knows I have. I play a skilful game, as Barca do, and I want to do as well as I have done at Inter.”

The Swede is poised to join Barcelona from Inter Milan in a deal which will see Cameroon striker Samuel Eto’o move the other way and the Italian side receive 50 million euros ($71 million).

“Everything seems to be all set, it just needs my signature. I’m really pleased and enjoying everything that’s happening. When this is all settled I’ll be the happiest man in the world,” he said.

If Ibrahimovic passes his medical on Monday, he is scheduled to be officially unveiled as a Barcelona player at 6:30 pm.