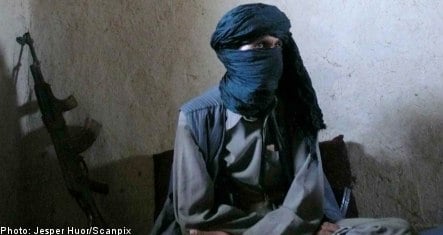 “Revenge will come. Maybe not today, or tomorrow, or next week. But it will come,” the Taliban leader told the TT news agency in an interview published on Wednesday.

“Swedes will be killed.”

Described as a sinewy man in his forties and referred to as Zamir, the man claims to be second in command of Taliban forces fighting in the northern Afghan province of Balkh.

In an interview carried out in a secret location several hours from the provincial capital of Mazar-i-Sharif, the base of operations for Swedish troops in the area, Zamir emphasized that he and other Taliban supporters have no plans to submit to the wishes of foreign peacekeepers or the current government of Afghanistan.

“Faith burns deep in our hearts and we’ll never resign ourselves to a foreign ceasefire. We’d rather die as martyrs,” he told TT.

He claimed foreign soldiers weren’t interested in helping Afghan citizens, but instead were trying to “poisoning our faith” and create artificial divisions pitting Afghan against Afghan.

According to Zamir, there are around 60 guerrilla fighters in the Char Bolak district, about 40 kilometres west of Mazar-i-Sharif.

They are armed with Kalashnikovs, rocket launchers, and mines, and are prepared to employ suicide bombers in an effort to drive out foreign troops and disrupt the upcoming Afghan elections, scheduled for August 20.

Three of his fighters were killed last week in a fire fight with Swedish and Finnish troops who were on patrol 150 kilometres west of Mazar-i-Sharif as part of the NATO-led International Security Assistance Force (ISAF).

Taliban supporters under Zamir’s command also have contact with other Taliban sympathizers in Afghanistan and Pakistan, he said.

But the group’s orders originate with Mulla Omar, the leader of the Taliban who served as the de facto head of Afghanistan when the group ruled the country between 1995 and 2001.

Zamir explained that Taliban supporters would only be willing to lay down their weapons once foreign soldiers have left Afghanistan and current president Hamid Karzai agrees to share power with the guerilla group.

When asked what message he had for the Swedish people, Zamir urged them to remove their troops from Afghanistan.

“Take home your soldiers, your young men. You have nothing to gain here, only death,” he said.

He added, however, that Swedes and other foreigners would be welcomed by the Taliban under certain conditions.

“If you come without weapons to rebuild our poor, warn-torn country, you will be welcomed,” he told TT.

“If you are Muslims.”