But there still remains no official explanation as to why the ship sank.

“We already have a few strong theories as to why the ship sank so quickly. But since the Norwegian accident investigation board is involved, as well as representatives from the Langeland’s shipping company, we will wait to announce the cause,” Jörgen Hansson, the commander of the coast guard ship overseeing the dives, told TT.

The vessel, which was loaded with stone, was found at a depth of around 110 metres in the southern part of the Koster fjord and was located with the help of a Remotely Operated Vehicle (ROV).

“We have had ideal weather to dive with ROV cameras,” Hansson said. “We can say that the vessel is intact. We haven’t seen any major external damage.”

An ROV is a small remote-controlled underwater craft that can take pictures. But the craft also has a pair of small grip arms that are used to move things out of the way to obtain clear images.

The Langeland sank after it had entered the Koster fjord in search of shelter from strong winds. The ship’s six-person crew are presumed to have perished in the accident.

It is believed that the bodies of the crew members are still inside of the ship. 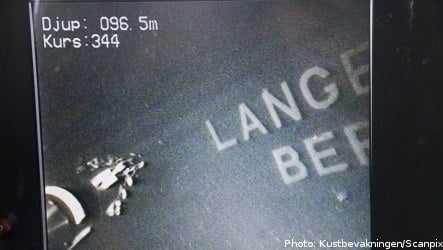 The Langeland’s six-person crew are presumed to have perished in the accident.

The vessel is at a depth of around 110 metres in the southern part of the Koster fjord and was located at around 1pm this afternoon with the help of a Remotely Operated Vehicle.

“We were able to identify the name of the vessel from the pictures, and could thereby confirm that it is the Langeland. It is lying on its port side in the mud and looks to have landed with force. But sight was very poor down there so we have not been able to see that much,” Ulrika Nilsson at the Swedish coastguard told the TT news agency.

The shipping line together with its insurance company which now have the main responsibility to decide on whether to salvage the ship.

“Our task is done and we have now submitted the details to the shipping line which will decided about salvaging. We will keep a check so that the ship does not start leaking oil, but there is currently little risk,” Ulrika Nilsson confirmed.

The chances of finding any of the six crew alive are adjudged to be very slight due to the depth and the duration of time since the accident.

A massive search operation had been ongoing since Friday when the Langeland sank after it had entered the Koster fjord in search of shelter from strong winds.