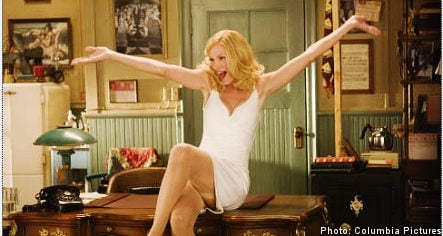 Uma Thurman stars as Ulla in The Producers (2006)

Finn-Erik Vinje has caused an escalation in what is promising to become an all out language war, by publishing a post on his blog last week asking, “Why are Swedes so stupid?”.

The citation, Vinje writes, is taken from a publication written 60 years ago but, he claims, remains a relevant question today.

The basis of Vinje’s assertion is that Swedish viewers of Himmelbå, a Norwegian television series based on the British production “Two Thousand Acres of Sky”, have complained that the language is too difficult to understand and would prefer to see a series in Swedish, with Swedish actors, in a Swedish setting.

Vinje reacts to a review of the series in the Expressen newspaper in which Norwegian is described as an “incomprehensible and ugly language”.

“Line Verndal in the female lead can look as much like (the Swedish actress) Lena Endre as she likes. But she is still speaking that strange double Dutch,” Expressen’s Nils Schwarts writes.

The retired linguistics professor argues in response that Norwegians have no trouble understanding spoken Swedish.

“Swedish is child’s play for us – in its spoken form anyway. When we have contact with Swedes and realize that they don’t understand we simply shift to using the equivalent Swedish word.”

Vinje goes on to claim that it is thus unnecessary for Swedish to be subtitled on Norwegian television although adds that perhaps it may be useful to do so for some of the Norwegian dialects.