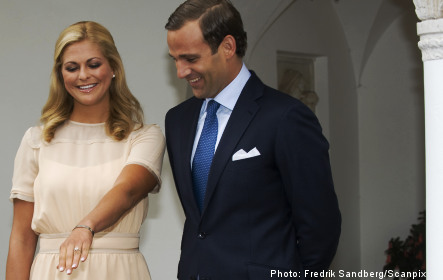 The couple were staying at the idyllic Villa San Michele when Borgström popped the question.

“I went down on one knee and proposed,” Bergström told members of the press gathered at the royal family’s Solliden residence on the island of Öland.

“And I said, ‘Of course I want to,” Princess Madeleine added.

Asked what had attracted them to each other, Borgström replied:

“I fell for her beautiful blue eyes and her wonderful laugh.”

“He’s also the nicest person in the world, a wonderful friend,” she said.

Princess Madeleine wore an apricot-coloured chiffon dress when the newly engaged couple emerged in public for the first time since their engagement was made public on Tuesday morning. Jonas Bergström appeared in a dark blue suit with a light blue shirt and blue tie and with his hair neatly parted.

The engagement celebrations began on Monday night with a crayfish party, but the real engagement dinner is planned for Tuesday evening and will be attended by both families.

Jonas Bergström said the couple planned to wed at “the end of next year or the start of 2011.”

Royal Court press chief Nina Eldh said the engagement had been planned for some time and had already been approved by the king and the government.

“They’ve known each other a long time, and with Crown Princess Victoria and Daniel Westling having got engaged it’s nice that they’re able to do the same. Love is contagious,” she said.

The government officially approved the marriage plans at an extraordinary meeting held on Tuesday.

Jonas Bergström will follow in the footsteps of Daniel Westling in being made a duke after his marriage to the princess.

Bergström, who is 30-years-old, met the princess through mutual friends in the autumn of 2002.

Jonas Bergström graduated from Danderyd’s high school in 1999 with top grades and completed a law degree at Stockholm University in 2006. He is currently working as a lawyer at the prestigious Stockholm firm Vinge.