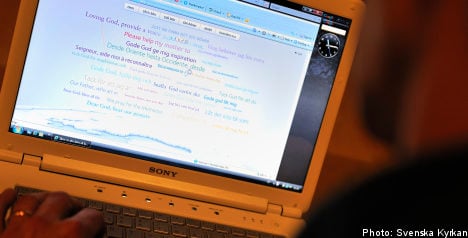 The campaign also includes the possibility to pray via mobile phones (limited to 160 characters), as well as cinema and television advertising.

A prayer sent by text message from a mobile phone will wing its way to the Church of Sweden’s new prayer page. Alternatively, users can submit a prayer direct to the new page or subscribe to an RSS feed of all the latest religious utterances.

The campaign was launched by the Church of Sweden at a Tuesday morning press conference and judging by previous voter turnout they are faced with a challenge of biblical proportions.

Around 5.6 million Swedes are eligible to vote in the church elections to be held on September 20th, but turnout is historically low – with a paltry 12 percent registering their preference in the previous vote in 2005.

The church has allocated a budget of around 10 million kronor ($1.4 million) for the prayer and election advertising campaign, excluding press advertisements.

According to Marianne Ejdersten Launikari, head of communication at the Church of Sweden, the religious group is probably the first of its kind to advertise an online prayer service.