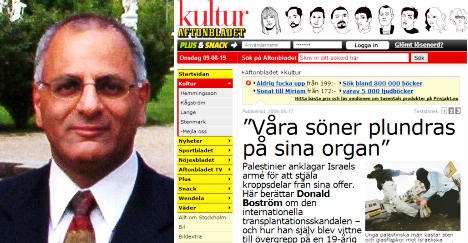 “I feel really upset, furious and disappointed. Really there are no words to describe fully how I feel about this, not even in Hebrew,” says Dagan, 53, in a telephone interview with The Local.

The Ambassador says he is unable to fathom a decision by Sweden’s largest circulation newspaper Aftonbladet to publish a two-page spread alleging Israeli Defence Force and medical sector complicity in a sinister organ-harvesting ring.

“What’s the motivation behind publishing something like this, which implicates Israel, Jews, doctors and the authorities in a sort of vague conspiracy? What if somebody were to be stabbed now in Stockholm or Malmö. Are they trying to encourage that kind of act?

“You don’t have to be paranoid to draw comparisons with similar accusations made against Jews in the past, killing Christian for their blood, for example,” says Dagan.

The Aftonbladet article, published in its culture section on Monday, refers to a case in 1992 when a young Palestinian man was allegedly returned to his family five days after his death at the hands of Israeli soldiers.

Writer and photographer Donald Boström says the body had been dissected and stitched back together in the intervening period. He claims to have spoken to families who were certain that young Palestinian men were being used as involuntary organ donors for Israel, a charge Ambassador Dagan dismisses as absurd.

“Where is the meat here? Can you really hide something like that in a democratic country without there being criminal repercussions. Of course you can’t.”

Dagan questions whether the newspaper would have published similar accusations against non-Jews.

“It plays into a certain mode of thinking. And when you see how the article is phrased, how can you not be reminded of the sort of things that were published 60 or 70 years ago?”

The Israeli ambassador says he is sure that “not all Swedes agree with this kind of garbage” and hopes that people will speak out against the publication.

“It calls for real reflection and criticism on the part of quality, responsible journalists and Swedes on the whole. People might say that Aftonbladet has published things like this before but it’s about time to stop tolerating it.”

Dagan says he remains optimistic towards the possibility of a peaceful solution to the conflict between Israel and the Palestinians.

“With Obama we are currently on the threshold of a resumption of talks. What is the aim of publishing this article? To hamper such a development.”

Benny Dagan has worked in the Israeli foreign service since 1985. He has been stationed abroad on numerous occasions, including twice in the United States. He says he has enjoyed his first year in Stockholm but is dismayed by this week’s developments.

“Unfortunately we see a lot of articles like this in the Arab media, and often people don’t expect much more from undemocratic countries. But I don’t understand how it can happen here in Sweden, a country that has long been a beacon of democracy and human rights.

“In the year since I’ve been here I’ve found Swedes to be generally fair and honest people and it’s important that people take a stand on this issue.”