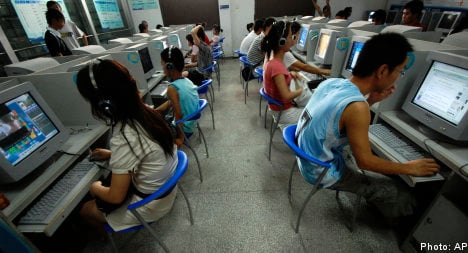 Children use computers in a library in Xiangfan in China's Hubei province.

It has been brought to the knowledge of The Local that the website has been blocked and it is thought that a news article entitled “Sweden expels Chinese diplomat” may be to blame for the cold-shoulder treatment.

A reader living in China at the time said the article could not be read in Shanghai after its publication on June 22nd 2009. The article details allegations that a Chinese diplomat was expelled for spying on political refugees living in Sweden.

In a tit-for-tat response to the expulsion, the Chinese authorities shortly thereafter ordered a Swedish diplomat back to Stockholm.

A review of other Swedish news websites on Thursday has shown that The Local appears to currently be alone in incurring the wrath of the “Golden Shield Project”, sometimes given the nickname the “Great Firewall of China”, which was founded in 2003 with the task of blocking offending websites.

China’s internet controls have long been a source of discomfort for the media. Voice of America and the Chinese version of the BBC have both habitually spent periods in Chinese internet quarantine, along with many blogging and social networking sites.

High-profile Swedish libertarian blogger Johan Norberg is among those that have spent periods out in the cold.

“I write quite a lot about Tiananmen Square and so on. I never actually had it confirmed but I presume that it perhaps had to do with that.”

“I have been to China and have even met a person who works with internet control there. As I understand it they have a Swedish staff which keeps a check on these things,” Norberg told The Local on Thursday.

The Local has learned that its news is currently only accessible to Chinese internet users prepared to run the gauntlet of police surveillance software and the watchful eye of security staff at internet cafés, and apply their technological creativity to skirt the “great firewall”.

The China Internet Illegal Information Reporting Centre (CIIRC) is the Chinese government organ which administers matters of internet security. It was founded in June 2004 and is supported by a raft of government ministries.

“CIIRC is mainly focused on contents harmful to the healthy growth of minors, such as obscenity and pornography, gambling, violence, terror, criminal abetting, and contents that spread ethnic hatred, libelling and insulting, violating the others’ rights, and violating intellectual property rights,” the centre’s website explains.

The Local made attempts to contact the Chinese embassy in Stockholm for clarification of the situation but was unsuccessful.