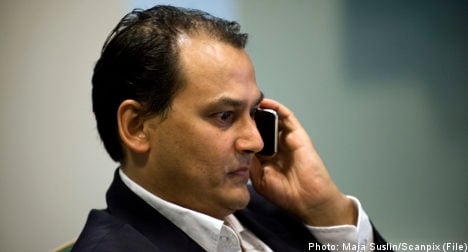 Johan Sellström, a Swedish IT pioneer and former board member of GGF, has reported Pandeya to the service asserting that he is owed more than 6 million kronor ($840,000), according to a report in business news website DI.se.

Johan Sellström has also confirmed that he is considering suing Pandeya for the money he claims he is owed as the enforcement service procedure can take time, he told the newspaper.

Sellström, who was one of the founders of the IT consultancy Icon Medialab, was recently cited by Pandeya as evidence of the financial strength of GGF.

The former GGF technical director claims that he has outstanding claims against the company totaling 1.6 million kronor.

Hans Pandeya is also reported to have outstanding tax debts of around 780,000 kronor, the newspaper reports.

The service has made attempts to inform Hans Pandeya over the claims against him but has not been able to confirm receipt.

Trading in the shares of Global Gaming Factory X AB have been immediately suspended, the Aktietorget exchange stated in a press release on Friday afternoon.

GGF announced in June that it planned to purchase the popular downloading website The Pirate Bay for 30 million kronor.

Pandeya announced in the beginning of August that the purchase was set to be rubber-stamped by shareholders by August 27th at the latest.