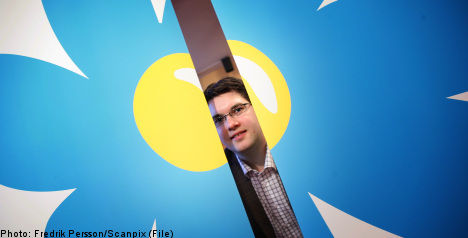 According to the latest poll of voter sympathies carried out by the Sifo polling firm, the red-green parties have support from 48.1 percent of the voters, while the four Alliance parties together garner 45.2 percent.

But if the election were held today, the Sweden Democrats, which have crossed the four-percent threshold, would be the kingmakers.

Support for the Sweden Democrats rose from 3.1 percent to 4.2 percent, giving them the ability to tip the scales of power in a Swedish parliament where the two main political blocs are only separated by 2.9 percent, according to the Sifo poll.

Both the Social Democrats and Prime Minister Fredrik Reinfeldt of the Moderate Party, however, have said repeatedly that neither party has any plans to cooperated with the Sweden Democrats or become dependent on them to form a coalition.

In a statement regarding the Sifo poll results, the prime minister said that support for the Sweden Democrats would likely drop when the 2010 parliamentary election campaign heats up and that both blocs plan on moving ahead with platforms lacking input from the Sweden Democrats.

For the most part, Reinfeldt didn’t want to comment on possibility of the Sweden Democrats being kingmakers or other theories about possible partnership with the party.

“I don’t want to give them any unnecessary attention,” he said.

According to political scientist Sören Holmberg, Swedish democracy may be in for a “difficult situation” if the Sweden Democrats end up as the party that could give either political bloc a majority in the Riksdag.

“We may have a thorny discussion about what sort of influence the Sweden Democrats can have in Swedish politics. But we should also be reminded that the government doesn’t need to resign [if it’s unable to achieve a majority],” he told the Svenska Dagbladet newspaper.

“There needs to be a majority for a no-confidence vote and then the opposition and the Sweden Democrats would have to support it.”

The poll results were published on Sunday in the Göteborgs-Posten, Svenska Dagbladet, and Skånska Dagbladet newspapers.

The results come from responses given by 1,911 people who were asked between August 10th and 20th to say which party they would vote for if Sweden’s parliamentary elections were held today.

The parties’ figures are given below in percentages, with changes from the previous poll given in parentheses.