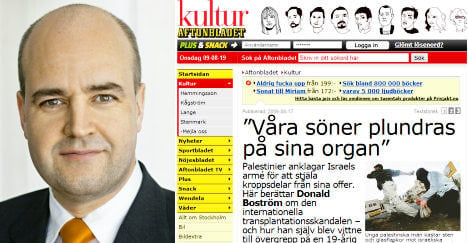 The high circulation Aftonbladet daily made the allegations in a story last week,

sparking public outrage in Israel and prompting senior figures in the government to demand that Sweden distance itself from the report.

But Reinfeldt said it was not for the government to comment on the content of every newspaper, stressing that a free press is an integral part of Swedish democracy.

“It’s important for me to say that you cannot turn to the Swedish government and ask it to violate the Swedish constitution,” he was quoted as saying by the TT news agency.

Reinfeldt also rejected the suggestion that the row could undermine his country’s work in the Middle East peace process as the current holders of the EU presidency.

“Political ambitions always risk being used as an excuse to break off contacts or efforts, but I have no reason to believe that (is what is happening) at this point in time and I hope it won’t go down that route,” he said.

A spokeswoman for the Swedish prime minister later confirmed the comments.

Meanwhile, around 20 demonstrators gathered in front of the Swedish embassy in Tel Aviv on Monday under a banner reading: “Anti-Semitism under the cover of freedom of expression.”

Swedish Foreign Minister Carl Bildt is expected to visit Israel in two weeks time and Israeli foreign ministry spokesman Yigal Palmor has said that the incident “will cast a worrying shadow over meetings if it is not resolved”.

Bildt himself was however keen to downplay talk of a diplomatic row when questioned by reporters on Friday.

“We have a very strong state relationship between Israel and our government. We are both open and democratic societies,” Bildt said.

Elisabet Borsiin Bonnier, the Swedish ambassador to Israel, had initially expressed outrage at the article, but Stockholm distanced itself from her remarks several days later, drawing a stinging response from the Israelis.