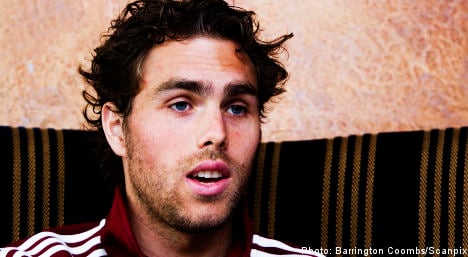 Back-to-back defeats by Sunderland and Hull in Bolton’s opening Premier League matches have turned the spotlight on the lack of goals from the club’s £10 million signing, who has managed to find the net just five times since his arrival from Toulouse last year.

Elmander was brought in as a replacement for Chelsea-bound Nicolas Anelka and Bolton boss Gary Megson believes it is time for the Swede to “step up to the plate.”

Megson said: “We haven’t got the resources that some other clubs have got and that’s why we couldn’t hang on to Nicolas Anelka, never mind going to get another one.

“But we have got Johan Elmander, a lot of resources were put in on him.

“I said before Saturday that I don’t want to put undue pressure on him, but he’s got to start scoring goals – that’s what he’s here for.

“I don’t think there can be any more pressure on him, because everybody from the outside is starting to look at the fact that he’s doing a lot of good things, but he isn’t getting goals.”

Megson believes a reliable stream of goals from Elmander or anyone else would transform Bolton’s prospects.

“We had the best finisher in the country in my view in Nicolas Anelka 18 months ago,” Megson said.

“When he was here, the fact that he was the finisher that he is just completely transformed the football club. I feel that’s what we need now.

“Whether that person exists here and isn’t doing it yet or we need to bring someone in remains to be seen.”

Megson is hopeful Bolton will finally register a win away to Tranmere on Tuesday but recognises that the League Cup second round tie will be seen by some as rich in the potential for an upset.

“We haven’t set the season off well in terms of points, so people will be looking at this and thinking it’s a banana skin for us, as we will ourselves,” he said. “But the important thing is that we get through to the next round.”