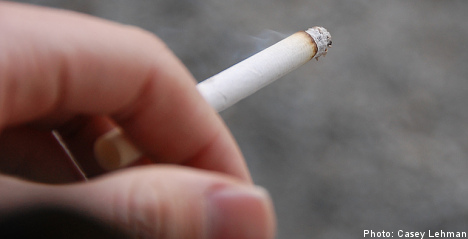 The amount is equivalent to 6,000 full time positions.

“We know that three out of four smokers want to quit and most municipalities that introduce bans during working hours also offer help. In that way the workplace supports those wanting to stop. We can now see that a smoke-free work environment provides financial benefits to councils,” Cecilia Birgersson at the institute said in a press release on Tuesday.

A smoke-free workplace means in practice that smoking is banned during paid working hours, including breaks. Lunch hour is not considered to be part of regular working hours.

The Swedish Association of Local Authorities and Regions (SKL), along with union groups, supports the introduction of smoking bans. A survey conducted by SKL earlier in 2009 showed that 64 of Sweden’s 290 local municipalities had decided to introduce work time smoking bans.

The institute has calculated the cost of smoking in terms of “smoking hours” at an average 282 kronor, based on a national average hourly wage.

The total cost is a multiple of the time taken to smoke a cigarette by the number of cigarettes per day (for the normal smoker) and the time to go to and from a designated smoking area – a total of 30 minutes per day per smoker. The cost per smoker is thus 31,300 kronor per annum.

Smokers typically claim an additional eight sick days in comparison with a non-smoker and this costs an additional 13,700 kronor per annum per smoker, bringing the total cost per smoker to 45,000 kronor, according to the institute’s calculations.