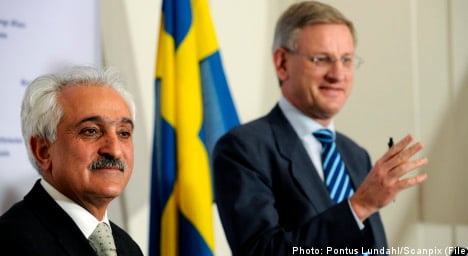 “During his visit, Bildt is expected to meet international and Afghan representatives, including President Hamid Karzai and Foreign Minister Dr Rangin Dadfar Spanta,” the Swedish EU presidency said in a statement.

Bildt wrote about the visit on his blog ahead of his departure on Sunday.

“Now it is important that the election result that is coming forth is seen as somewhat legitimate in Afghanistan itself and that it can thereby provide a basis for political stability in the coming year at least,” Bildt wrote.

Karzai appeared to be moving towards victory in Afghanistan’s fraud-tainted presidential elections of August 20th.

The figures gave Karzai 46.3 percent of votes announced and his closest rival Abdullah Abdullah 31.4 percent, widening his previous lead of around nine percent and apparently increasing his prospects of avoiding a run-off.

Bildt said he expected to brief his European colleagues on his Afghanistan visit during an informal meeting of EU foreign ministers in Stockholm on Friday and Saturday.