The saga of the Aftonbladet article — an allegation in a Swedish tabloid that Israeli soldiers steal the organs of Palestinian teenagers — caught me right between the eyes. I’m an American doctor. I’m Jewish; I have Swedish roots. In the supermarket I pick the longest line so I can catch up on the tabloids while I wait.

I read the English translation of this article (‘Our sons are plundered of their organs’ Aftonbladet 8/26/09, original in Swedish 8/17/09). It’s a hoot. Rambling and disjointed, it’s rife with irrelevant statistics and unproven statements, not unlike a recent favourite of mine in the Weekly World News, ‘Dick Cheney Abducted by Aliens.’ That one had photos too.

The Aftonbladet piece raises some medical issues I’d like to address. Among the organs successfully transplanted are heart and lungs- harvested from the chest- and kidneys, liver, pancreas, and intestine-harvested from the abdomen. Two critical issues that determine the ‘health’ of the harvested organ and therefore whether the transplant will be successful are its blood supply and its freedom from infection.

The story relies heavily on the author’s eyewitness account of a tense night on the West Bank seventeen years ago. Recall of the details of an event deteriorates over a matter of weeks or months and concurrent stress such as the presence of gunfire serves as a ‘memory distraction’ that makes accurate recall even more difficult.

Nonetheless the author describes for us what happened in 1992 to one Palestinian teenager whose organs, he believes, were stolen. According to his account, Israeli soldiers shot the young guy in the chest, then in each leg, then once ‘in the stomach.’

I take this last to mean the abdomen, since it isn’t possible to see the individual organ called the stomach from the outside of the body.

A gunshot wound to the chest or abdomen is a serious injury because it can damage internal organs- either by interruption of the blood supply, which causes hemorrhage, or because it causes infection via perforation of the intestine and/or the introduction of a foreign body. A guy shot in both legs can’t go far. Why, if the goal is to steal organs worth hundreds of thousands of dollars, would soldiers shoot an individual in both the chest and abdomen and risk damage to the valuable organs in these body cavities? Such organs are not usable for transplant.

The quality of the argument does not merit too much more ink. The writer of the Aftonbladet article made his most important contribution to our understanding of his work when he acknowledged that he’d not verified any of the claims he made. Most recently, the family of the young Palestinian whose organs were supposedly swiped said they’d never talked with the journalist and had no reason to think any of his allegations of organ theft were true.

As much as I enjoy the medical side of things, I think there’s a more instructive reading of this article. When I look at it with historical eyes, it has a macabre humour of its own. Is this writer serious? This story is such an old one, a twenty-first century version of the blood libel that has fueled brutality against Jews for centuries. The Aftonbladet piece made much of the story of the recent corruption bust in New Jersey that snared a couple of disgraced rabbis allegedly brokering human organs for cash. How is it that an American scandal that resulted in the arrest of 30 people, among them elected officials with the last names van Pelt, Cammarano, Elwell, and Vega, ends up a Scandinavian-modern version of medieval anti-Semitism?

The Swedish ambassador to Israel should be recognized for her recent condemnation of Aftonbladet’s revival of this hardy perennial of anti-Semitism. But the Swedish foreign ministry looks only disingenuous with its flat-footed protestations of respect for freedom of the press. That’s not what this is about. A modern European nation gave up a chance to make a simple statement to both reject anti-Semitism and reaffirm principles of good journalism.

Why they chose the route they did I don’t know, but Sweden looks parochial and out of step. We live in the information age. Read the blogs of any major news story. The public is wise to low journalism and increasingly rejects hate-mongering. The government of Sweden should get with the programme and do the same. 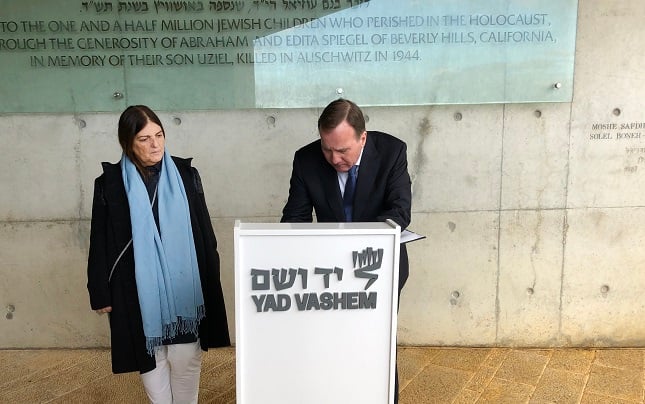