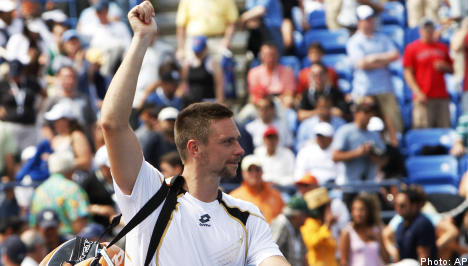 Robin Söderling set himself as Davydenko bowed out when two sets to one down in their fourth-round clash on Monday.

The Swede was 7-5, 3-6, 6-2 up when the eighth seed walked to the net to shake hands as we was unable to continue due to a thigh strain.

Söderling will play either Federer or Spain’s Tommy Robredo for a place in the semi-finals.

It was Söderling who sensationally ended Rafael Nadal’s long unbeaten run at the French Open at the start of the summer and he went on to reach his first Grand Slam final in Paris before losing in straight sets to Federer.

“I have improved my game in every aspect and I just need to do it in majors,” he said of his fine run of form this year.

“I have been beating good players and that has boosted my confidence. I think I have a chance to do well on hardcourts.”

Davydenko, who lost to Roger Federer in the US Open semi-finals of 2006 and 2007, broke first in the opening game and he held on to that advantage until the eighth game, when Söderling used his big forehand to good effect to level the scores.

Three unforced errors and a double fault from the Russian gifted the set to the Swede in the 12th game.

Games went with serve in the second set until the seventh game when Davydenko reached break point and this time it was Söderling who double faulted under pressure.

Davydenko won the next two games to make it four in a row as he levelled the set scores, Söderling double-faulting on set point as Davydenko had done in the first.

Söderling reasserted his control at the start of the third set, taking a 2-0 lead before Davydenko held serve, and then took a time out to get treatment for a painful left thigh.

He resumed with heavy strapping applied to the leg but he continued to struggle in the face of the Swedish onslaught and he quickly fell two sets down with Söderling breaking again in the seventh game.

The Russian slumped into his seat and after a brief consultation with the physio, he decided against playing on.

In stark contrast to the women’s tournaments, seeds have dominated among the men with an Open-era record of 14 making it into the last 16. Fifth seed Andy Roddick and ninth seed Gilles Simon were the only casualties.

Top seed and defending champion Federer, seeking to become the first man since Bill Tilden in 1925 to win six straight US Open titles, later takes on Spain’s Tommy Robredo, a player he has beaten eight straight times since a lone defeat in the 2002 Hopman Cup.

Giant John Isner is the sole home player left and he takes on Spanish hardman Fernando Verdasco hoping that his huge serve can counter the 10th seed’s allround game.

A failure to do so would mean that for the fist time in the Open-era, there would be no American players in the quarter-finals.

The final fourth round tie in the night session sees fourth seed Novak Djokovic of Serbia go up against wily Czech Radek Stepanek.