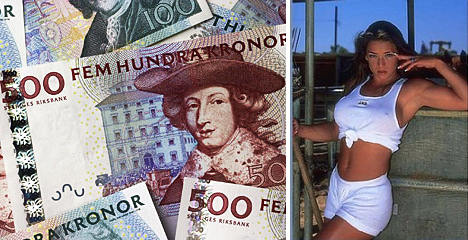 In April, the Borås District Court convicted the woman of gross fraud, sentencing her to a year-and-a-half in prison and ordering her to pay 282,000 kronor ($35,100) in damages. She lured her male victims using a picture of Cori Nadine, an American Playboy playmate, falsely claiming to herself be a model for Playboy magazine.

Since her trial, two more men have filed police reports, claiming the woman has defrauded them of a total of 537,000 Swedish kronor ($76,000).

Prosecutor Mats Ljungqvist told Borås Tidning newspaper that the woman has maintained the same modus operandi and that the crimes are nearly identical. The woman has not yet begun to serve her jail sentence.

The previous incidents involved the woman asking the men she met online for money, regaling them with tall tales of a fictional daughter who was suffering from leukemia. The 31-year-old also claimed she was being pursued by the mob. Her heart-wrenching pleas prompted her male victims to send her more than 500,000 kronor in total.

The woman denies the new accusations and claims that the money was a loan and a gift. She was arrested on Sunday on charges of gross fraud and fraud.