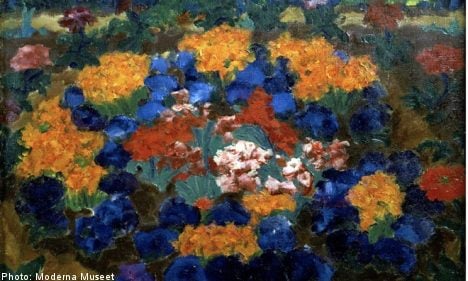 The work in question, ‘Blumengarten’ (the Flower Garden), was painted in 1917 by German expressionist Emil Nolde and was part of the private collection of Otto Nathan Deutsch, a Jewish businessman who fled to the Netherlands to escape persecution by the Nazis.

Since 2002, Deutsch’s heirs have been wrangling with the Moderna Museet, which acquired the painting in 1967 from a Swiss collector, in an attempt to reclaim the work.

According to the terms of a settlement, detailed in a joint statement issued by the museum and Deutsch family attorney David Rowland, the painting is to be bought by an unnamed European collector who will in turn loan the painting to the Moderna Museet for up to five years.

At that point, other expressionist paintings from the early 20th century will be lent to the museum for another five years.

“Both the Deutsch heirs and the Moderna Museet are satisfied with the outcome of the matter, which was settled under the principles of the 1998 Washington Conference, which calls for a fair and just solution taking all relevant circumstances into consideration,” said the joint statement.

The agreement brings to an end a lengthy and often acrimonious dispute over the fate of the painting and how both parties should be compensated for the work, which the museum claimed it acquired in a legal fashion and was unwilling to hand over without getting something in return.

The Moderna Museet’s demands prompted frustration on the part of Deutsch’s heirs.

“Sweden’s failure to return the Blumengarten painting is an exception to the international norm that Nazi looted art in public museums should be returned without conditions to its rightful owners,” Rowland said in a statement in February 2008.

While the German government compensated the Deutsch family in 1961 for Blumengarten and other works missing since Deutsch’s flight from the Nazis, the family contended that the money was not meant to correspond to the value of the painting, which Rowland had previously valued at $4 million, according to the Reuters news agency.