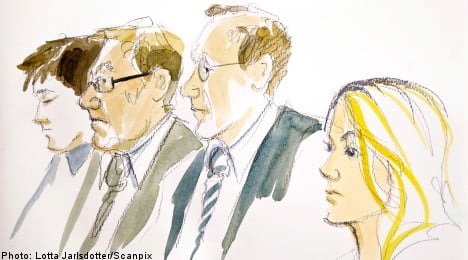 The evidence against the two presented by prosecutors was overwhelming, according to the court.

The court ordered that both teenagers undergo a psychiatric evaluation before determining their sentences.

Results from the tests aren’t expected for at least a month.

In making his final statement before the court, prosecutor Jakob Holmberg argued that both young people should be sentenced to four years of institutional juvenile care.

Both 16-year-olds appeared somewhat depressed and serious as Holmberg made his case to the court on Wednesday morning.

The boy stared at the floor while the girl gazed straight ahead.

The prosecutor said that both young people were equally responsible for the death of Johansson Rojo, even if each of them were accused of difference crimes.

According to Holmberg, the girl was responsible for urging the boy to carry out the crime.

“The motive is clear. The girl was killed to allow the youngsters’ relationship to continue,” said Holmberg.

He argued that the 16-year-old boy was credible and offered important information about the event, but that the girl’s story was distorted.

As he finished his remarks, he addressed both suspects.

“You must now live with what happened for the rest of your lives. Take the opportunity to work through this in order to get back on your feet,” he said.

Attorney Claes Borgström, who represented the 16-year-old boy, said it wasn’t so easy to sum up the case.

“This is a case about children. The accused, the victim, and the witnesses are children. This has significance for determining the sentence,” he said.

Borgström admitted that his client was largely responsible for the death of Johansson Rojo, who died from injuries caused by the boy following a party celebrating her ninth grade graduation.

“My client has never tried to hide what happened or minimize his roll. He’s provided an explanation of how it could have happened,” he said.

Borgström characterized the murder as resulting from a psychological phenomenon related to the young couple’s unusually strong teenage romance, which included engagement rings.

He said that they had an unrealistic view of adult life and how a relationship works.

He emphasized that the boy and girl as a couple were an extremely unfortunate match.

“He was submissive and she was dominant,” he said.

According to testimony and evidence gathered from mobile phone text messages, the 16-year-old girl had threatened to break up with the boy unless he killed Johansson Rojo, who had allegedly told several people that she was also in a relationship with the boy.

After asking Johansson Rojo to accompany him to a wooded area near the graduation party, the 16-year-old boy proceeded to beat and strangle the girl, leaving her for dead.

She was found early the next morning, seriously injured. She was then rushed to a hospital where she later died from her injuries.