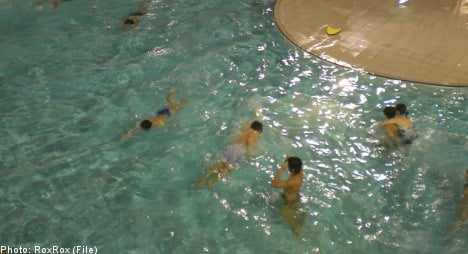 Water samples taken from 18 randomly chosen indoor public pools around the country revealed that a majority of the pools had nitrogen levels well above accepted levels, Sveriges Radio (SR) reports.

Nitrogen levels are often used as a proxy for determining the amount of urine in public pools.

Eight of the pools tested had nitrogen levels higher than 2 milligrammes per litre of water, while three pools had more than 5 milligrammes of nitrogen per litre.

“If it’s more than 1.5 milligrames per litre I’d begin to think a little that we’re dealing with contaminants in the water and that we have to check where it’s coming from. And most likely it’s people who are causing these high concentrations,” said Michael Ressner of Sweden’s National Board of Health and Welfare (Socialstyrelsen) to SR.

Specifically, increased amounts of human urine and sweat are likely the cause of high nitrogen levels in swimming pool water.

Reaction to the news that fellow bathers were in the habit of using public pools as toilets ranged from disgust to indifference among visitors questioned by Sveriges Radio.

“Gross! There are plenty of toilets out there, so I think people should go there instead,” one bather told SR.

“I’ve personally found like, turds, floating around and that was a little nasty,” said another younger guest at one of the pools.

While the tests only provided data about the pools at the specific time the tests were conducted, rather than about the overall standards of cleanliness, their results are still a cause for concern.

High concentrations of urine in indoor swimming pools have been found to contribute to the creation of trichloramine, a chemical compound which can cause runny eyes and throat irritation.

At pools with poor ventilation, the buildup of trichloramine can also cause asthma.

An ongoing study at Umeå University shows that employees who work at indoor public pools for at least one year have a 50 percent greater chance of developing asthma than the general population.

According to professor Gunnar Nordberg, who leads the research, simple habits of good personal hygiene can go a long way to protecting both pool workers and bathers from an increased risk for asthma.

“It’s important to let bathers know that they should wash themselves thoroughly and shower before they go in the pool,” he told SR.