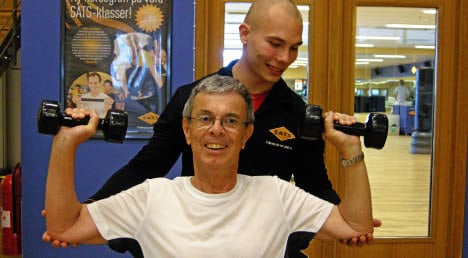 Summer 2008, and I knew something was wrong while driving past overbuilt exurbs in central California. Spanking new whitewashed homes stretched across inland valleys. “And where,” I asked my all-knowing brother, “and where do folks get the money for this?”

“They don’t have any dough. All they got is sub-prime credit,” he said.

Two months later Lehman Brothers collapsed, and the financial implosion rocked the planet. The outlook seemed grim, and even in snug Sweden, where I happen to live. A couple of international clients who engaged me as “communications consultant” moved into four-day weeks – and it got worse.

It was clear that 2009 would not be my best financial showing. After some sleepless nights, I could think of only one psychological escape hatch:

Shop! Spend big money on something!

For instance: How about a personal trainer at one of the nation’s gym chains like WorldClass or SATS? For 66 one-hour sessions at around 27,000 kronor ($4,000) they would hopefully remould my sagging self far faster than anything the finance minister could do for the stalled economy.

But hold on. I hear somebody asking: “Why can’t you train on your own?”

The sad truth is this. For two years I had dealt halfheartedly with sundry fitness machines at SATS in Kista near Stockholm, with no discernible results. Clearly the will power was lacking to push myself far beyond the physical comfort level: That is probably the only way to realistically improve overall fitness.

A qualified instructor was needed to egg me on. And SATS Kista had more than enough personal trainers on tap. I chose 22-year-old Christer Baskin, because I’d seen him working out with other wannabes. They looked pretty happy.

American celebrity trainer Scott White suggests that a proper assessment is essential to the personal training process. In my own case, Christer Baskin posed pertinent questions at our initial meeting in his office. He first asked me about my own goals. At age 67 and at 83 kg (182 lbs), weight reduction topped my list, closely followed by vanity urges like “looking better” while feeling sufficiently fit to face the cruel, cruel world.

A couple of days later we met for our first workout when various measurements were taken. The crucial Body Mass Index (BMI), for instance, indicated excessive fat, placing me in a risk zone: a guy who might be more prone to unpleasantries like a heart attack.

Christer settled on “core” training similar to army workouts. Such as running back and forth across the gym like an idiot, swiftly followed by stair-steppers on a pallet and then shadow boxing. The focus was to get my weight down while strengthening back muscles to improve posture.

Like a farm animal, I panted through thrice-weekly sessions with Christer who pushed me far beyond anything I considered vaguely reasonable. “Kom igen, kom igen!” (Keep at it!) was his stock phrase as I struggled to lift a barbell for the third time. And as the months rolled by, he incorporated an astonishing range of exercises: such as weight training, free weights, Swiss balls, kettle balls, yoga-like movements and even a few special exercises that he tailored on the spot. We seldom used machines.

Along the way, Christer discussed diet: “What sort of breakfast are you giving yourself?” The question was pertinent. Time magazine had run a cover story explaining why exercise won’t make you thin (See link below). Exercising is great, said Time, but dieting is the key.

But two months into training my weight had dropped from 83 kg (182 lbs) to 77 kg (169 lbs) without any change of diet. The BMI fat index moved dramatically downwards. How did all that happen? “Cardiovascular training!” explained Jonas Lissjanis, who manages SATS Personal Trainer programs in Sweden. “We do advise clients to look into their diets, and we’ll help. But we tend to focus on cardio training to activate more muscles in your body. So that you’ll burn more energy.”

Despite the welcome weight loss, overall progress was slow. A 25-year-old doing my programme would be preening finely-toned muscles by now. But (sadly) muscular development does take longer for older folk. So I decided to complement the three times weekly sessions with Christer by jogging twice a week with an experienced marathon runner, Erik Schenkel. He records my modest progress in complicated charts to help keep me motivated.

And encouragement I still need. It had finally dawned on me that genuine physical development would have to be a daily undertaking, in one way or other. My wife helpfully suggested additional household chores to keep me tip-top. “For starters, how about finally moving those heavy boxes into the attic?”

Who needs a PT?

Personal Trainers aren’t for everybody. At the same time, there are right and wrong ways to foster fitness. Licensed PTs know the rules of the game. You and I may not.

Strenuous and consistent training evidently has a long-term benefit. Uppsala University conducted a study showing that a control group of men under age 35 who then trained strenuously for several years could reasonably expect to add perhaps two additional years to their life spans.

Some of my own reasons were more immediate and perhaps vain. One year after I started training with the competent Christer, I had the annual dental checkup. The dentist said afterwards: “Your teeth look fine.” Then he added: “I think you’re looking good, too!”

Roger Choate is a communications consultant for Swedish companies. In earlier incarnations he worked with The Associated Press, Reuters and The Times (London).