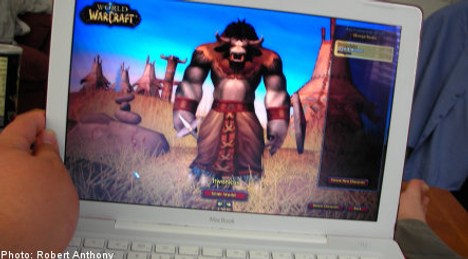 “This is a huge hidden problem in a lot of countries and it doesn’t get the same kind of attention because it takes place largely behind closed doors rather than out in public,” Sven Rollenhagen of the Youth Care Foundation (Stiftelsen Ungdomsvård) told The Local.

For nearly two decades, the organization has been helping young people in Sweden recognize and manage computer gaming addiction.

But following a February report in which the organization dubbed World of Warcraft “the cocaine of the computer games world”, the foundation has been flooded with inquiries from across the globe looking for more information about how to address the problem.

“We were bombarded with calls and emails from around the world from people who thought they or someone they knew might be addicted,” said Rollenhagen.

Soon thereafter, the Youth Care Foundation set about translating their materials into English. In addition, Rollenhagen has since been working to create a Centre of Computer Game Addiction, an international network of professionals and organizations devoted to bringing attention to what he believes is a major public health issue.

“I’m worried we’re going to end up with a lost generation,” said Rollenhagen.

“Generally we’re talking about boys and young men who end up playing games so much that other aspects of their lives like family, work, school, relationships all fall by the wayside.”

Without doing a shred of marketing, the organization has already received “a huge number” of inquiries from schools, social service agencies, addicts, and their families located all over the world, a phenomenon which has Rollenhagen convinced he and his colleagues are just at the tip of the iceberg.

“If you extrapolate from the number of calls we received or simply from the millions of games that are sold around the world each year, you start to see how big the pool of potential addicts is,” he said.

“I believe we’re dealing with a problem of pandemic proportions.”

Already ahead of the curve by “daring” to view gaming addiction as something distinct from other common problems facing young people, Sweden’s Youth Care Foundation has put the country on the map as a leader in developing strategies for coping with the issue.

“Sweden has long been at the forefront of efforts to battle addiction,” he said, adding that there are very few, if any, experts elsewhere in the world who have dedicated their work completely to the study and management of gaming addiction.

The Youth Care Foundation now has versions of their website, Game Over Stockholm (www.spelfritt.se), in English, German, and French, and Rollenhagen hopes to arrange a gathering of experts on the issue in Stockholm later this autumn.

“We want to bring people together who are dealing with or have dealt with this so they can share our experiences, exchange ideas, and learn from one another,” he said.

He hopes that his efforts, and those of others in his growing network, can help curb the spread of gaming addiction and avoid what he sees as the “incredible waste of resources” that comes with it.

“These are smart guys, highly intelligent, capable of being anything – doctors, engineers, whatever. But they find themselves tempted by computer games and end up just wasting time in front of a screen,” said Rollenhagen.