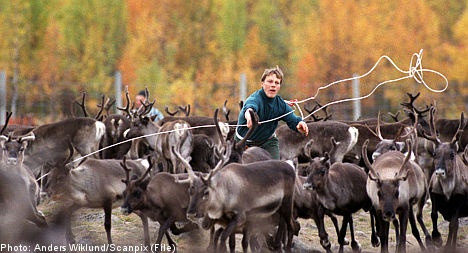 According to current laws, Sami reindeer herders are restricted from engaging in any other activities besides reindeer herding, something the working group finds out of date.

Today, fewer and fewer Sami are able to support themselves by tending to reindeer and as a result, the rules governing how Sami organize themselves to manage reindeer herding need to be updated.

Thus, the proposal would also allow Sami not involved in reindeer herding to become members of one of Sweden’s 51 samebys, the administrative and financial collectives which by law have the sole right to conduct reindeer herding in Sweden.

Currently, about 10 percent of Sweden’s Sami population belong to a sameby (literally ‘Sami village’ in English). In addition to the right to control reindeer herding, members of a sameby also have hunting and fishing rights within its designated area.

The government would also agree to consult with the Sami Parliament (Sametinget) when preparing legislation and regulations which would affect Sami living conditions, the working group wrote in an article published in the Dagens Nyheter (DN) newspaper.

Sara Larsson, head of the Sami Parliament’s governing board had a mixed reaction to the proposal.

“There are some good things there, but we had hoped for greater reforms which take into account the land and water rights of all Sami,” she told the TT news agency.

Larsson is worried that the proposal allowing Sami not involved in reindeer herding to become members of samebys may create internal divisions within the collectives.

She is also critical of the working group for not proposing that Sweden sign on to the Indigenous and Tribal Peoples Convention, adopted by the International Labour Organization (ILO) in 1989.

However, Larsson praised suggestions that would allow samebys to pursue activities other than reindeer herding and would ensure that the government consult the Sami Parliament regarding pertinent legislation.

An estimated 20,000 Sami live in Sweden, with the population concentrated in the far north of the country.